March 2020 ends with a bang as a magnitude 6.5 earthquake rattles north of Boise. It comes after 650 foreshocks have rocked the area in the last 2 weeks: Yesterday's quake was the 8th major quake of March and the 30th of 2020 so far. 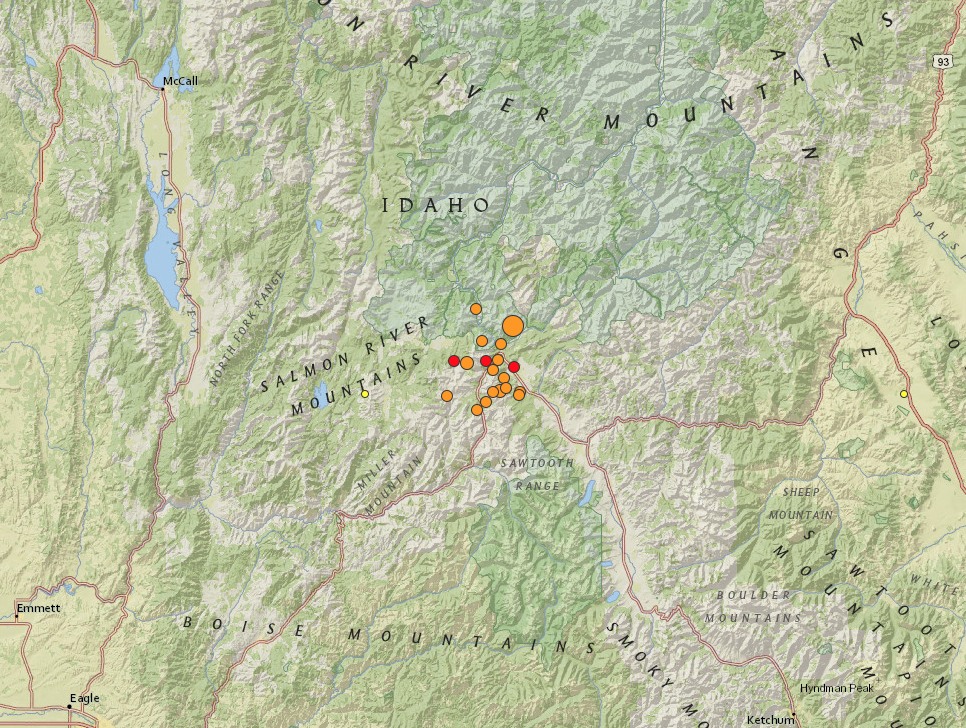 Map USGS, showing mag 6.5 quake along with smaller foreshocks during the last 7 days.

March 2020 ends with a bang as a major magnitude 6.5 earthquake rattled north of Boise, Idaho last night. The U.S. Geological Survey reports the magnitude 6.5 temblor struck just before 6 p.m. It was centred 73 miles (118 kilometres) northeast of Meridian, near the rural mountain town of Stanley. According to Reuters, there were no immediate reports of damage or injuries.

More than 2 million live in the region that could feel the Idaho quake, according to the USGS, with reports of shaking coming in from as far away as Helena, Montana, and Salt Lake City, Utah. Marcus Smith, an emergency room health unit coordinator at St. Luke’s Wood River Medical Center, said the hospital, about 65 miles (104 kilometres) south of the epicentre, shook but the quake didn’t interfere with the treatment of any patients. The hospital in Blaine County is on the front line of Idaho’s coronavirus outbreak, in a region with the nation’s highest per-capita rates of known COVID-19 cases outside of New York City and its surrounding counties.

More than 600 earthquakes have hit across Utah and surrounding areas after a 5.7-magnitude quake struck near Salt Lake City about two weeks ago, according to University of Utah Seismograph Stations. As of Monday morning, the University of Utah Seismograph Stations, or UUSS, recorded 658 earthquakes as part of a series of aftershocks. On March 18, a 5.7-magnitude earthquake struck Magna, west of Salt Lake City, McClatchy News reported. The quake was felt from Idaho to California, according to McClatchy News. K.com