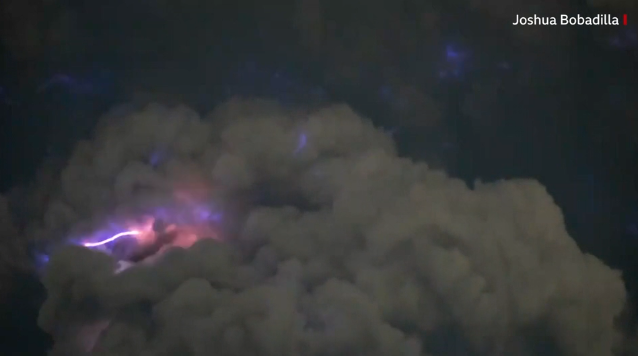 Screengrab showing eruption generating a spectacular electric storm, the video can be seen below
A new bulletin has been issued by the Philippine Institute of Volcanology and Seismology (PHIVOLCS) over the eruption of the Taal Volcano.

After a brief warning of activity following lava fountaining at 2:49-4:28 AM today, Taal’s eruption resumed immediately with weak sporadic lava fountaining and hydrovolcanic activity at the Main Crater that generated steam-laden plumes approximately 2km tall. New lateral vents were observed to have opened up on the northern flank where short 500m lava fountains emanate. 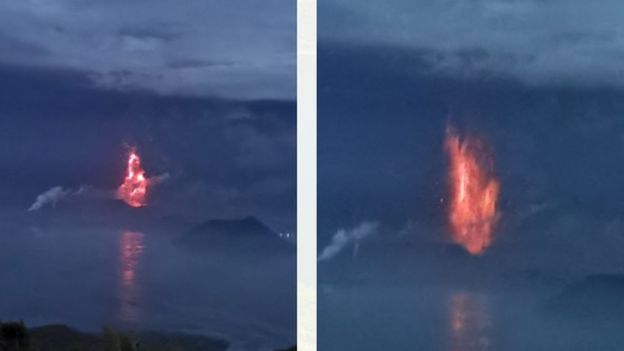 Photo Phivolcs
Since the last update, heavy ashfall from the ongoing eruptions of Taal has reportedly fallen southwest of the volcano island in Cuenca, Lemery, and Taal, Batangas. Fine ashfall can cause irritation and breathing problems, especially among the elderly and children. Long-term exposure may be harmful to respiratory health. In addition, areas of ashfall have also experienced sulfurous smell which can also cause irritation. Affected populations are advised to avoid inhalation of ash and use N95-grade facemasks or wet cloth or towel when going outdoors. Motorists are advised to drive with extreme caution as ash can cause poor visibility and, when wet, can make roads slippery.

The Philippine Seismic Network has recorded a total of one hundred forty-four (144) volcanic earthquakes in the Taal region since 1:00 PM, January 12, 2020. Forty-four (44) of these earthquakes were felt with intensities ranging from Intensity I – V in Tagaytay City; Alitagtag, Lemery, Santo Tomas, and Talisay, Batangas. Such intense seismic activity probably signifies continuous magma intrusion beneath the Taal edifice, which may lead to further eruptive activity. DOST-PHIVOLCS strongly reiterates that total evacuation of the Volcano Island and high-risk areas within the 14-kilometre radius from the Taal Main Crater must be enforced. Population in areas in the southwest are advised to guard against the effects of heavy and prolonged ashfall.

Civil aviation authorities must advise aircraft to avoid airspace around Taal Volcano as airborne ash and ballistic fragments from the eruption column pose hazards to aircraft. DOST-PHIVOLCS is continually monitoring the eruption and will update all stakeholders of further developments. PHIVOLCS