Security forces open fire on demonstrators in Tehran: Anti-government protests enter third day: Lying means conscious and deliberate falsification of the truth (we did not lie) 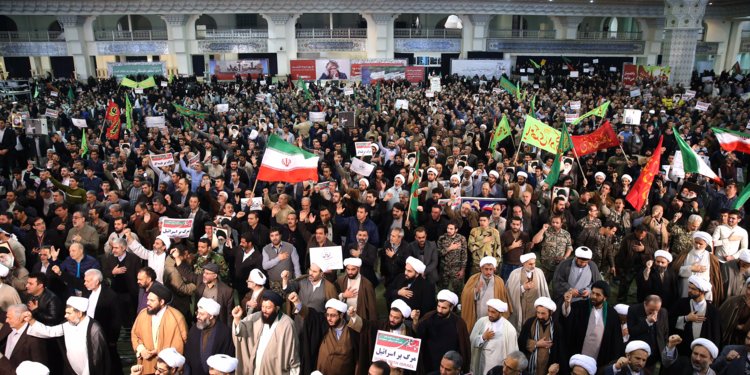 Anti-government protests in Iran have entered the third day today after Tehran finally abandoned its pretence and admitted shooting down a passenger jet. Dozens of protesters gathered and chanted slogans at a Tehran university today amid a wave of public anger after the plane came down with dozens of Iranians on board.

A string of celebrities have also turned on the regime and two-state TV hosts have quit over Tehran's three days of false reporting over the crash. Film director Masoud Kimiai has pulled out of Tehran's annual Fajr Film Festival, saying he was 'on the side of the public'. A prominent singer, Alireza Assar, has also cancelled a concert to show support for the protests which resumed over the weekend. Iran's only female Olympic medallist Kimia Alizadeh has already announced her defection from the Islamic republic, piling further pressure on the regime.

Tehran is now signalling de-escalation in the stand-off with the United States which had sparked fears of a Middle East conflict. Dozens of protesters gathered at a Tehran university today where demonstrators chanted: 'They killed our elites and replaced them with clerics.' Tehran's police chief claimed today that the security situation in the capital was 'fine' despite the protests. General Hossein Rahimi denied that police had shot at protesters and said officers had been ordered to show 'restraint'. Daily Mail

Iranian media outlets closed to opposition groups reported security forces had opened fire on demonstrators in Iran. The forces used rubber bullets as well as live ammunition according to these reports. Demonstrations were taking place around the country protesting the government's handling of the shooting down of a Ukrainian airliner last week resulting in the death of 176 passengers and crew. Demonstrators are angered by the regime's attempt to shield the Revolutionary Guard Corp from its responsibility for the event. YNETNEWS.com


Police in the Iranian capital, Tehran, have denied using live ammunition against protesters outraged by the shooting down of a Ukrainian airliner. BBC
xx
Iran's belated admission that it "unintentionally" hit the Boeing plane with missiles has caused outrage at home and abroad. At protests in Tehran and other cities, there were chants against the leadership and reports of clashes with security forces, which fired tear gas.

What happened at Sunday's protests in Tehran?

After a wave of anti-government protests on Saturday, demonstrators returned to the streets despite a large deployment of security forces. Riot police, members of the elite Revolutionary Guard on motorbikes, and plainclothes security officials were out in force. In one apparently symbolic act rejecting state propaganda, video showed students taking care not to walk over the US and Israeli flags painted on the ground at Shahid Beheshti University in Tehran. In some social media clips, protesters can be heard chanting anti-government slogans, including: "They are lying that our enemy is America, our enemy is right here." Many of the protesters are women. BBC

What is Iran reporting over the demonstrators?

'Corrupt acts’ by the US, allies cause of the current situation in the region:

Ayatollah Khamenei Leader of the Islamic Revolution Ayatollah Seyyed Ali Khamenei says ‘corrupt actions’ taken by the United States and its allies are the main cause of the current situation in the region, urging regional countries to boost cooperation to undo such actions. The Leader made the remarks in a meeting with visiting Qatari Emir Sheikh Tamim bin Hamad Al-Thani in Tehran on Sunday PressTV

The Iranian administration has denied spreading misinformation following the crash of a Ukrainian passenger plane near Tehran last week. A Ukraine International Airlines jetliner crashes a few minutes after take-off from Tehran to Kyiv early Wednesday, killing all 176 crew members and passengers.

In their initial reactions to the incident, Iranian officials attributed the crash to technical failure and dismissed the possibility of the plane having been shot down by missiles. However, after conducting thorough investigations, Iran’s General Staff of the Armed Forces released a statement on Saturday, acknowledging that the Ukrainian plane had been brought down by missiles fired “unintentionally” due to “human error.” The discrepancy between the initial accounts and the subsequent investigations gave rise to a wave of public anger, with some accusing government officials of seeking to cover up the truth.

Speaking at a press conference in Tehran on Monday, Ali Rabiei, the administration’s spokesman, said, “As a matter of fact, we did not lie. Lying means conscious and deliberate falsification of the truth. Such a thing never took place.” PressTV

Lol. Is that video supposed to be the proof that demonstrators were shot? Pretty weak. You hear no gun shots ever, you see no gathered protesting, just people walking along a busy street then all of a sudden the camara goes to blood on the ground. No one is screaming, no crowds wailing, no one is running away which if shots were being fired would be the case, and no body is shown connected to the blood either. And then video cuts off dark.
But that is our evidence this report is the truth? It reminded me of the one photo we got to prove that general was indeed dead. First I read an Iranian news report that there was not much left of the plane crash debris to be able to determine identities. That just little pieces of everything was found and it would take time to figure things out who was who. Then comes a photo, another news report, of his decapitated wrist and hand lying on the ground, whole with all fingers conveniently in place and intact, no scratches or blood just dirty and that big ring he wore was miraculously also still in tact on his finger and perfectly positioned for the photo op. Just saying....its hard to believe this.

U.S. Are the terrorists! Along with Israel and Saudi, creating mass genocide. Grow up, war is dead and they are sickening to all that is holy.