Another one blows! 2020's incredible seismic and volcanic activity continues: The Taal volcano, south of the Philippines capital Manila, emitted an ash plume about 1km (0.6 miles) into the sky. 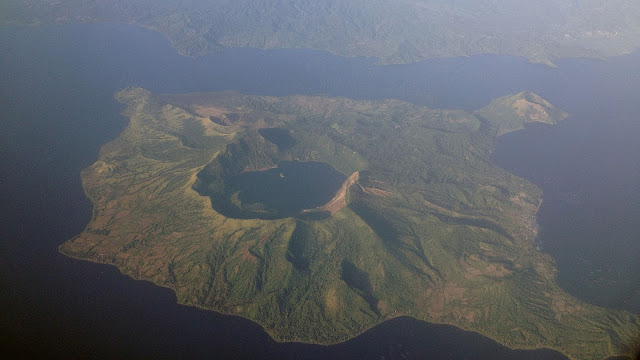 A volcano in the Philippines has emitted a giant plume of ash, prompting authorities to order the evacuation of some 8,000 people living nearby. The plume coming from the Taal volcano, south of the capital Manila, stretched about 1km (0.6 miles) into the sky.

Rumbling sounds and tremors were also reported around Taal - the Philippines' second-most active volcano - on Sunday. Local authorities have issued an evacuation order as the Taal volcano shows signs of an impending eruption. Taal has not erupted in decades, but one catastrophic event in 1911 killed over 1,000 people. Thousands of people were being evacuated south of the Philippine capital of Manila on Sunday as the Taal Volcano began to send clouds of ash and stone into the sky.

The volcanic activity, if it continues, means that Taal will likely erupt "within days to within weeks," Renato Solidum, chief of the Philippine Institute of Volcanology and Seismology, told French news agency AFP. Located about 65 kilometres (40 miles) away from Manila, Taal is one of the country's most active volcanoes, although it has not had a major eruption since 1977.

A catastrophic eruption in 1911 claimed 1,335 lives. The National Disaster Risk Reduction and Management Council suggested that about 8,000 residents in the area should be evacuated. Flights have also been temporarily suspended in and out of Manila airport. Ash reportedly reached as far as the province of Cavite, directly south of Manila. Regional government officials have cancelled school classes for Monday and warned residents to stay indoors.