Death toll 21 in Jakarta Indonesia, with tens of thousands evacuated: Floodwaters reached up to 2.5 meters (8 feet): As much as 37 centimetres (14.5 inches) of rain on New Year’s Eve 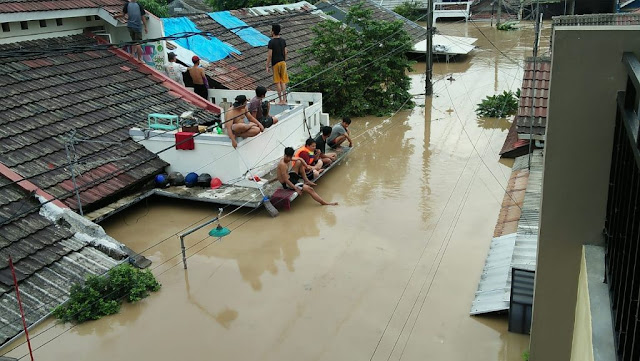 According to the Japna Times, floodwaters reached up to 2.5 meters (8 feet) in places. As much as 37 centimetres (14.5 inches) of rainfall was recorded in Jakarta and West Java’s hilly areas on New Year’s Eve, causing the Ciliwung and Cisadane rivers to overflow, Jakarta Gov.

The flooding, among the deadliest in years, caused chaos in parts of Southeast Asia’s biggest city with train lines blocked and power outages in some areas. Swathes of Jakarta and nearby towns were inundated after heavy rain fell on Dec. 31 and into the early hours of New Year’s Day. Social affairs ministry spokesman said in a message to Reuters that the death toll had now reached 21. As of Thursday, over 62,000 people were evacuated in Jakarta alone, disaster mitigation agency spokesman Agus Wibowo said, twice as many as a day earlier. Thousands of livestock were reported missing and thousands of houses damaged in the neighbouring province of Banten, media reported. Indonesia’s President Joko Widodo told.