Porkless?: Over-use of viable antibiotics and the ever-adapting swine fever virus is leaving experts to believe the virus is virtually unstoppable as it arrives in Europe 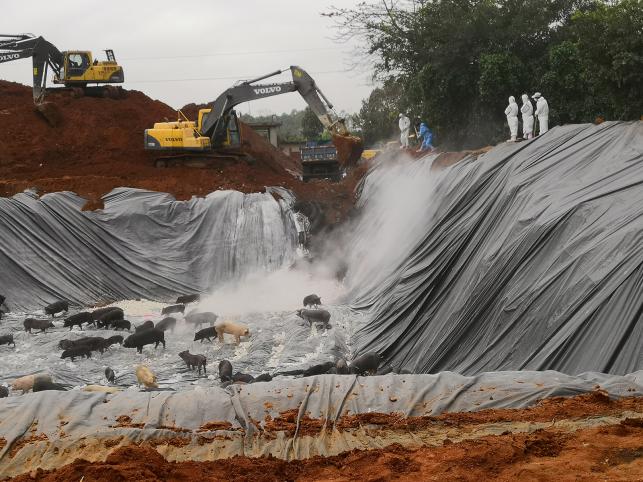 Pigs wait to be buried alive in a pit next to workers in protective suits and excavators following an African swine fever outbreak in the area, in Beihai. Photo: Reuters

China produces 50% of the world's pig population and African swine fever has killed more than 40% of Chinese pigs, (hundreds of millions of animals) in just over a year and is now reported in almost 50 countries, and earlier this month it was discovered to have leapt 300km across Poland from its easternmost provinces to farms near its western border. A report earlier this month by Pork Checkoff reports that swine fever has now reached Romania.

Swine fever extremely hardy, it can survive being cooked and processed and will endure in frozen meat for a number of years. It is transmitted directly between animals, or by the feeding of infected meat, and there have also been cases of infected animal feed. It has now arrived in Europe.

Over-use of viable antibiotics and the ever-adapting swine fever virus is leaving some experts to believe this new virus is virtually unstoppable.  Losses due to African swine fever (ASF) continue to increase in 2019 and experts from Rabobank estimate that more than 25 per cent of the world’s pig herd (350 million head) could be gone by year’s end.

Most recently, major ASF outbreaks in Romania and the Philippines have added to the costly total. In a recent global ASF report from the World Organization of Animal Health (OIE), major losses were shown in Romania with 20,069 head and in the Philippines with 45,670 head.

Back in May 2019, The Big Wobble claimed this year would be the year when the pork farming industry would begin to unravel as China, who produce half of the world's pork was set to drop because millions of pigs were being culled or dying from being infected as African swine began to ravage Asia.
Step forward six months to November 2019 and there is not enough pork in the world’ to deal with China’s demand for meat. Hundreds of millions of pigs, 40% of the total have died or have been culled from swine fever, and the prices are soaring.
A report by the Guardian last week claims, since August 2018, when China notified the World Organisation for Animal Health that ASF (swine fever) was in the country, the disease has spread with extraordinary speed. Some 40% of Chinese pigs – hundreds of millions of animals – have now been lost, and the result has been a chronic shortage of pork and rocketing prices. The Chinese government has been forced to dig into its gigantic emergency reserves of frozen meat. “The producer price has risen 125% since July,” said Rupert Claxton of international food consultancy Girafood. That increase has helped drive up China’s inflation rate, which in October broke through the government target of 3% to hit 3.8%.
Zhu Zhenchun, a restaurateur in Shenzhen, south-east China, told the Observer: “We’re spending about 10,000 yuan more a month just because of the price increase. [That is the equivalent of monthly salaries for two restaurant employees.] Everyone knows this is a problem now. Everyone is hoping the price will come down either before or just after the Chinese New Year.
As a result, pork prices are rising outside China too. Europe has seen a jump of at least 35% since the beginning of the year. “The problem is that total global pork exports in 2018 were 8 million tonnes, and China is short by 24 million,” said Claxton. “There just isn’t enough pork in the world to fill the gap.”
African swine fever is a highly contagious virus which is fatal to pigs. It is extremely hardy, can survive being cooked and processed, and will endure in frozen meat for a number of years. It is transmitted directly between animals, or by the feeding of infected meat, and there have also been cases of infected animal feed. In the UK it is now more a case of being prepared for it to arrive than trying to shut it out Zoe Davies, National Pig Association ASF has been circulating in Europe for a number of years, but it began to spread at a more rapid rate last year. It is now reported in more than 40 countries, and earlier this week was discovered to have leapt 300km across Poland from its easternmost provinces to farms near its western border.