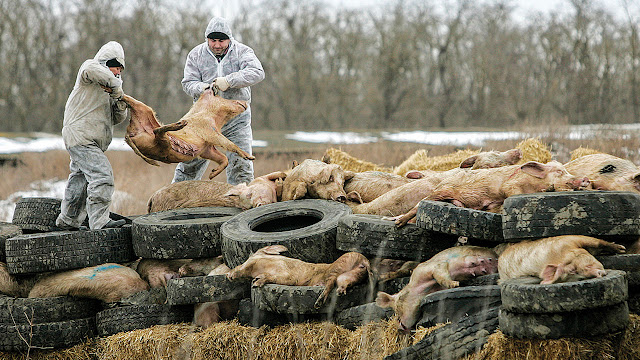 2019, has become the year when the pork farming industry began to unravel as China, who produce half of the world's pork is set to drop by almost one-third because 200 million pigs have been culled or dead from being infected as African swine fever spreads through the country.
According to Rabobank, China’s pork production is seen at around 38 million tonnes in 2019 versus 54 million tonnes last year, Sherrard told Reuters, citing the company’s latest forecast.
That would be the lowest level in at least 20 years, according to the National Bureau of Statistics data, with repercussions across the global market for all animal proteins.
The decline would be nearly 30 per cent larger than annual output in the United States and equivalent to Europe’s yearly pork supply, Rabobank said.

Vietnam has culled more than 2 million farmed pigs infected with African swine fever, the government said on Monday, as the virus continues to spread rapidly in the Southeast Asian country. Pork accounts for three-quarters of total meat consumption in Vietnam, a country of 95 million people where most of its 30 million farm-raised pigs are consumed domestically.
The virus was first detected in Vietnam in February and has spread to 29 provinces, including Dong Nai, which supplies around 40% of the pork consumed in Ho Chi Minh City, Vietnam's southern economic hub.
"The risk of the virus spreading further is very high and the evolution of the outbreak is complicated," the government said in a statement.
It said many provinces had failed to detect outbreaks and cull infected pigs properly due to a lack of funds and the space needed for burying the dead pigs.
The disease, which is harmless to humans but incurable in pigs, has also spread quickly across neighbouring China.
The United Nations Food and Agriculture Organization (FAO) in March advised Vietnam to declare the swine fever outbreak as a national emergency.

South Korea said Friday that it is scrambling to prevent the spread of the highly contagious African swine fever on its pig industry after North Korea confirmed an outbreak at a farm near its border with China.
South Korea's agriculture ministry said North Korea reported to the World Organization for Animal Health that 77 of the 99 pigs at a farm in Jagang province died of the disease and another 22 pigs were culled.
The outbreak in North Korea comes after the disease in past months ravaged farms in China, where more than 200 million pigs have been reportedly culled or died, and also spread to Vietnam, Cambodia and Mongolia.
The disease is harmless to humans but for pigs is fatal and highly contagious, and there is no known cure or vaccine.
North Korea's official Rodong Sinmun newspaper on Friday published three different articles detailing the spread of the African swine fever across Asia, but none of them mentioned that the disease has reached the North.
Oh Soon-min, director of quarantine policies at South Korea's agriculture ministry, said quarantine measures and blood tests will be stepped up in some 350 pig farms near the inter-Korean border. Fences and traps will also be installed near the farms to prevent the pigs from contacting wild boars that roam in and out of North Korea.
"While North Korea's Jagang province, where the outbreak of the African swine fever was confirmed, is near the border between North Korea and China, we do believe this is a serious situation as there is a possibility that the disease can spread toward the South," Oh said.
He said the South Korean government believes the North raises about 2.6 million pigs in 14 government-run or co-operative farms.
The South hopes to discuss the issue with North Korea at an inter-Korean liaison office and find ways to help the North fight the spread, said Eugene Lee, a spokeswoman from Seoul's Unification Ministry, which deals with inter-Korean affairs.
The outbreak comes as the North has significantly slowed its engagement with South Korea following the collapse of a February summit between North Korean leader Kim Jong Un and U.S. President Donald Trump.
Lee said the South had told the North "several times" that it could help in case of African swine fever outbreak but did not confirm how North Korean officials responded.