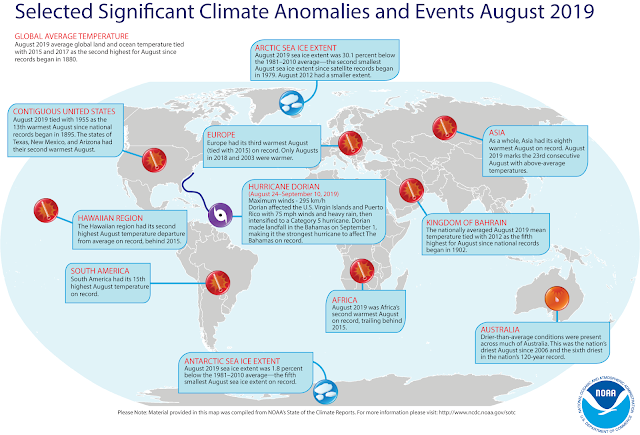 Summer 2019 was hottest on record for Northern Hemisphere and August tied as 2nd hottest for globe ever, according to a new report by NOAA. The Northern Hemisphere summer (June through August) record high-temperature ties with the same period in 2016.

Scorching temperatures around the world last month tied August 2019 as the second-hottest August on record and capped off the hottest Northern Hemisphere summer (June through August), tied with 2016. The heat also impacted Arctic sea ice coverage, shrinking it to the second smallest for the month on record.

Here are highlights from NOAA’s latest monthly global climate report: Climate by the numbers August 2019 The average global temperature in August was 1.66 degrees F above the 20th-century average of 60.1 degrees, tying it with 2015 and 2017 as the second-hottest August in the 140-year record, according to scientists at NOAA’s National Centers for Environmental Information. The hottest August on record was August 2016, and the five hottest Augusts on record have all occurred since 2014.

The global sea surface temperature last month was 1.51°F above the 20th century monthly average of 61.4°F, making it the highest global ocean temperature for August on record.

Meteorological summer (Northern Hemisphere) | Year to date June through August 2019, was the Northern Hemisphere’s hottest meteorological summer on record, tied with 2016. The period of June through August, which also marks the Southern Hemisphere’s winter, was the planet’s second hottest in the 140-year record at 1.67 degrees F above the 20th-century average, behind June-August of 2016. The last five June-August periods are the five hottest on record. The period from January through August produced a global temperature that was 1.69 degrees F above the 20th-century average of 57.3 degrees, making it the third hottest January-August period on record after 2016 and 2017.

Other notable August weather events: One of the biggest disasters our planet has endured in August was wildfires, at the beginning of the month, a Greenpeace Russia team was documenting wildfires in the taiga forest, in the Krasnoyarsk region of Siberia. Despite statements by Russian authorities, the intensity of forest fires in Siberia was dramatically increasing. A, 4.3 million hectare fire - an area larger than Denmark - was contributing significantly to climate change. Since the beginning of the year, a total of 13.1 million hectares had burned in Siberia. Fires have rage every year, but this summer's blazes reached unprecedented size and strength. The Siberian fires have emitted more than 166 Mt CO2 - nearly as much as 36 million cars emit per year, as we move into September the fires are still burning.

Water Stress: As increasing pressure on the planet rises with the threat from climate change, the collapse of our living species, dying oceans, dying agriculture and a constant threat of WWIII hanging over our heads, it should not come as any surprise to learn that 17 countries – home to one-quarter of the world’s population—face “extremely high” levels of baseline water stress. In a new report by the World Resources Institute, one-quarter of the world’s population almost two billion people—face “extremely high” levels of baseline water stress, where irrigated agriculture, industries and municipalities withdraw more than 80% of their available supply on average every year. Full story

More devastating wildfires: Peru became the latest country to suffer horrendous wildfires after more than 22,000 hectares (54,363 acres) of the forest, protected areas and farmland in drought-stricken parts have been destroyed. In August, biologists and environmentalists from around the world warned the presidents of Peru, Brazil and Bolivia about the dangers of devastating fires in what they said might be the region’s worst drought in at least half a century. Full story

Super typhoon Lekima: More than a million people were evacuated as Super typhoon Lekima smashed into eastern China on August the 10th.  Lekima made landfall in the early hours of Saturday in Wenling, between Taiwan and China's financial capital Shanghai. The storm was initially designated a "super typhoon", but weakened slightly before landfall - but still had winds of 187km/h (116mph). The city evacuated some 250,000 residents, with another 800,000 in the Zhejiang province also taken from their homes. An estimated 2.7 million homes in the region lost power as power lines toppled in the high winds, Chinese state media said. It is the ninth typhoon of the year, Xinhua news said - but the strongest storm seen in years. Full story

Rare tornadoes devastate Europe: Huge storms across the planet caused chaos killing 200 people! Tornadoes hit Europe from Luxembourg to Amsterdam, China was battered by the third-largest typhoon in its history and a further 107 killed in India. Full story

Greece wildfires: On the 14th of August, a total of 56 wildfires were reported to be burning out of control in parts of Greece as smoke covered Athens with strong winds fanning the flames. Full story