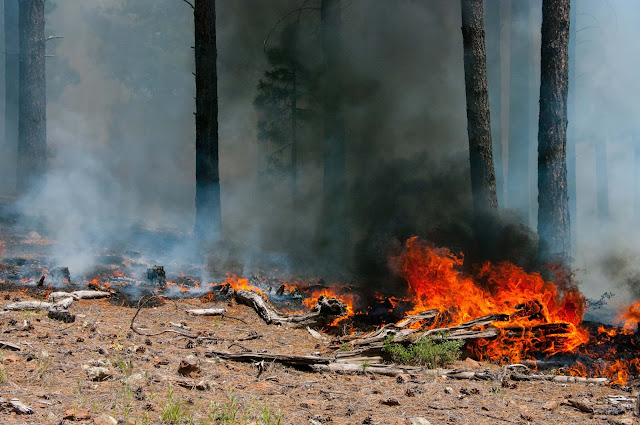 Peru is the latest country to suffer horrendous wildfires after more than 22,000 hectares (54,363 acres) of forest, protected areas and farmland in drought-stricken parts have been destroyed.

A spate of wildfires in the past month around the planet has worried the authorities, especially a 4.3 million hectare fire in Siberia where an area larger than Denmark is ablaze.
Since the beginning of the year, a total of 13.1 million hectares has burned in Russia's Siberian forests, known as the ‘lungs of Europe’.
The Siberian fires are emitting more than 166 Mt CO2 - nearly as much as 36 million cars emit per year.
Recent wildfires in Alaska, Scandinavia and Greenland caused by abnormally warm temperatures have also caused concern
France, Spain and Portugal have also suffered devastating fires this summer after their record-breaking heatwave.
In February high temperatures caused massive forest fires in Chile with the government declaring a 'state of catastrophe'.
In May, hundreds of wildfires surrounded the outskirts of Mexico City causing a chronic air quality problem for 20 million residents.
And in January this year, temperatures on a 20 year high in parts of Australia caused thousands of residents to evacuate from an out-of-control bushfire that is thought to have been deliberately lit

According to Reuters, strong winds fanned the flames that quickly crossed the Andean regions of Cajamarca and Lambayeque in northern Peru, which are experiencing prolonged droughts.
Fires have been contained in five nature reserves, including the Laquipampa Wildlife Refuge that is home to the protected spectacled bear, the inspiration for the Paddington Bear character in English children’s literature, said Cecilia Cabello with Peru’s protected areas agency Sernanp.
The charred remains of spectacled bears and other wildlife have been found in some areas, said Cabello.
Peru is experiencing one of its driest years in two decades, according to Peru’s forest service Serfor.
In August, biologists and environmentalists from around the world warned the presidents of Peru, Brazil and Bolivia about the dangers of devastating fires in what they said might be the region’s worst drought in at least half a century.
“One of the most worrisome signs of global climate change is an increase in the frequency of severe droughts in the Andean-Amazonian region,” they said in an open letter delivered by the NGO Pronaturaleza.