Imagine if the human population fell by 60%: Two-thirds of all animal and insects extinct by 2020: One in five of the world’s plant species threatened 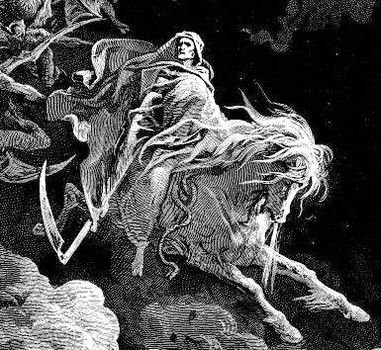 Behold a pale horse: noun, representation of Death, as in literature or the Bible.
Just this week, The Big Wobble reported on the millions of small dead sea birds which are been reported dead annually since 2015. This year the Short-tailed Shearwaters are dying in record amounts but in recent years puffins, murres, and auklets have been dying in unprecedented numbers thought to be due to starvation due to lack of fish along the Westcoast, however, the Alaskan problem pales into significance after a new report was released this week. Full story


Dr Ken Rosenberg from the Cornell Lab of Ornithology and the American Bird Conservancy was the first to "run the numbers" on bird populations. "We knew some species were declining," he told BBC News, "but we thought that, while rare birds were disappearing, the more generalist birds - and those better adapted to human landscapes - would be filling in the gaps."

The team's calculations were based on bringing together all the bird monitoring in North America for the past 50 years - every major survey carried out across the continent since 1970. "What we saw was this pervasive net loss," Dr Rosenberg said. "And we were pretty startled to see that the more common birds, the everyday backyard birds and generalist species, are suffering some of the biggest losses." That same pattern, he added, is likely to be mirrored in other parts of the world. And the situation in Asia, as the other study has shown, is a particularly striking case of a human-driven extinction crisis.

Dr Ken Rosenberg's research concludes there are three billion fewer birds in the US and Canada today compared to 1970 - a loss of almost one-third of North America's birds.

The North America study revealed how many birds were being lost across every type of habitat - from grasslands to coasts to deserts. While it did not directly assess what was driving this, the scientists concluded that, among multiple causes, the major factor was habitat loss driven by human activity.

However, North America's study pales into significance compared to the global situation.

World to Lose Two-Thirds of Wild Animals by 2020?

A dramatic new report warns of an ecological collapse on a global scale. An incendiary new report from two major conservation groups predicts dire circumstances for the world's wild animals, warning that two-thirds of vertebrate populations could be wiped out by 2020, based on 1970 population levels. The new report, called the Living Planet Index, was prepared by the World Wildlife Fund and the Zoological Society of London. The index found that animal populations dropped by 58 per cent between 1970 and 2012, largely as a result of human activities, from poaching to habitat loss and pollution. The team then extrapolated those trends forward to 2020. They based their analysis on data collected in the field on more than 14,000 populations of vertebrates, from 3,700 different species. The data came from many sources, from all around the world. Full story

Two-thirds of all animal and insects extinct by 2020: One in five of the world’s plant species threatened

Imagine if the human population fell by 60%, that would be like emptying the America's, Europe, Africa, Oceania and China of people.In just one years’ time, the World will have lost two-thirds of all wild animals.
Our oceans have warmed up at such an alarming rate they have absorbed 60% more heat than previously thought and we face in the near future oceans containing more plastic than fish.
Regular readers of The Big Wobble will be well aware of the state of our oceans because of our regular reports on the unprecedented fish die off's around the world recently and algae bloom's and pollution poisoning our oceans and waterways. Animal die-offs.
"We are facing a +3-4°C world and will condemn us to an uninhabitable planet."

We are looking at...

Ask yourselves, have we as a civilisation crossed the tipping point, can our planet recover or is it too late: One in five of the world’s plant species is threatened with extinction, according to the first global assessment of flora, putting supplies of food and medicines at risk. The State of the World’s Plants report written three years ago, by experts at the Royal Botanic Gardens Kew, revealed that there are currently 390,000 species of known plants, with more than 30,000 used by people. However, more than 5,000 species have invaded foreign countries and are causing billions of dollars of damage every year.

“Plants are absolutely fundamental to humankind,” said Prof Kathy Willis, director of science at Kew, who led the new report. “Plants provide us with everything - food, fuel, medicines, timber and they are incredibly important for our climate regulation. Without plants, we would not be here. We are facing some devastating realities if we do not take stock and re-examine our priorities and efforts.”

The report is the first of what will be an annual benchmark analysis to set out what is known - and not known - about plants and highlight critical issues and how they can be tackled.
According to the Guardian, the biggest factors threatening plant species with extinction are the destruction of habitats for farming (31%) - such as palm oil production and cattle ranching, deforestation for timber (21%) and construction of buildings and infrastructure (13%).
Climate change is currently a smaller factor - 4% - but is likely to grow.
“I suspect we won’t actually see the full impact until 30 years down the line as it takes so long for plants, especially trees, to produce their offspring,” said Willis.
One important crop that is already suffering is coffee, as rising temperatures make the beans impossible to grow and increase diseases in key countries such as Ethiopia.
"We are facing a +3-4°C world and will condemn us to an uninhabitable planet" and  Tipping point breached! The monarch butterfly has a 95% decline since the 1980s' in North America: Two-thirds of ALL animals and insects extinct in 2 years
Yesterday another frightening report was released by the journal, Nature, regarding Climate change: Oceans are 'soaking up more heat than earlier estimated'...
Regular readers of The Big Wobble will be well aware of the state of our oceans because of our regular reports on the unprecedented fish die off's around the world recently and the algae bloom's and pollution poisoning our oceans and waterways. Animal die-offs
According to Nature, the world has seriously underestimated the amount of heat soaked up by our oceans over the past 25 years, researchers say.
Their study suggests that the seas have absorbed 60% more heat than previously thought.
They say it means the Earth is more sensitive to fossil fuel emissions than estimated.
This could make it much more difficult to keep global warming within safe levels this century.
Quantification of ocean heat uptake from changes in atmospheric O2 and CO2 composition