Hat-trick! Krosa will be the third storm to hit Japan in only 10 days after super typhoon Lekima hit late last week and typhoon Francisco made landfall on Aug 6 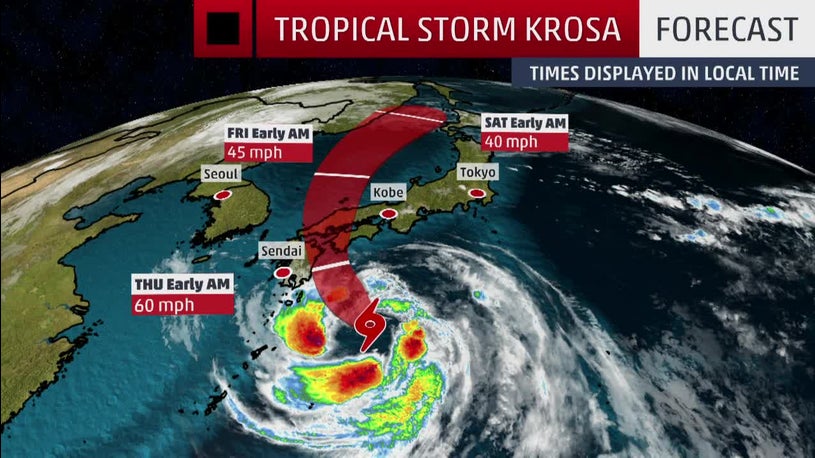 Map weather.com meteorologists
A severe tropical storm may make landfall in western Japan on Thursday, bringing torrential rains, violent winds, and rough seas. The Meteorological Agency estimates that Krosa was situated 220 kilometres southeast of Tanegashima Island in Kagoshima Prefecture at 3 p.m. on Wednesday. The agency says the storm is moving north-northwest, producing sustained winds of 108 kilometres per hour and gusts of 144 kilometres per hour. The agency says Krosa may approach the western regions of Kyushu and Shikoku. It adds that the storm may sweep through western Japan on Thursday.

Rainfall for the 24 hours through noon on Thursday is expected to reach 900 millimetres in Shikoku, 600 in Tokai, and 500 in Kinki, and northern and southern Kyushu. For the 24 hours through Friday noon the numbers are 600 to 800 millimetres in Tokai, 400 to 600 in Shikoku and Kinki, and 200 to 300 in northern Kyushu and Chugoku. The overall precipitation may exceed 1,200 millimetres in some areas. Krosa is also expected to bring strong winds to the Pacific side of western Japan through Thursday, with speeds of 108 kilometres per hour for Shikoku and 97 kilometres per hour for northern and southern Kyushu. Gusts are expected to reach 144 to 162 kilometres per hour. The seas are already rough. Expected wave heights through Thursday are 10 meters along with the coastal areas of Shikoku and 9 meters along the shores of northern and southern Kyushu, Kinki and Tokai. People are advised to stay on the alert for violent winds, high waves, and storm surges, as well as mudslides, floods, and swollen rivers.