"Half the expected growth in salmon volumes wiped out this year!" Salmon fishing industry on the verge of collapse after almost 10 million fish die in Norway 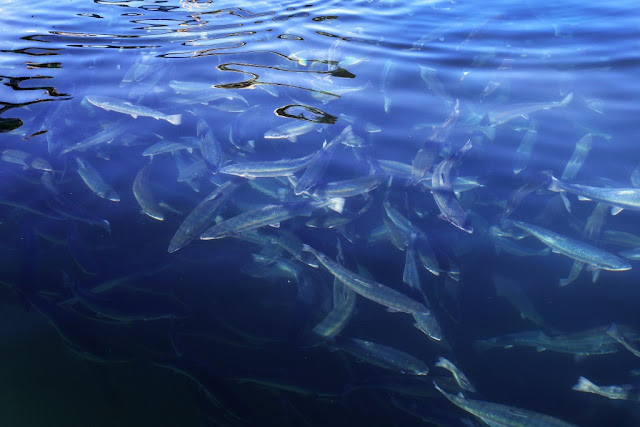 A sudden surge in algae has killed at least eight million salmon in one week across Norwegian fish farms, the state-owned Norwegian Seafood Council has said.
The enormous algal blooms, due to recent warm weather, have spread rapidly around Norway's northern coast, sticking to fishes' gills and suffocating them.
Wild fish can swim away from the lethal clouds of aquatic organisms, but farmed fish are trapped. The algae are continuing to spread, the Norwegian Directorate of Fisheries said.
The organization said on Tuesday that more than 10,000 tonnes of farmed salmon, with a sales price of some 620 million Norwegian crowns (L56m), had been killed, but the Seafood Council said the loss would be much greater.
"It's too soon to say how big the losses will be for the producers.
Preliminary numbers point to eight million dead fish, corresponding to 40,000 tonnes of salmon that won't reach markets," Seafood Council analyst Paul Aandahl said.
This means the algae may already have wiped out over L200m worth of fish in total.
Norway is the world's largest exporter of salmon and the effect of the millions of deaths will likely see half the expected growth in salmon volumes wiped out this year as a result, while prices are likely to rise, said Lars Konrad Johnsen, an analyst at Fearnleys, an investment bank which specialises in maritime industries.
"Providing the net effect is something in the area of 20 - 30 thousand tonnes, this means you lose around half of the growth that was to come this year - and that will no doubt affect prices," Mr Johnsen told Reuters.
Norway exported 1.24 million tonnes of salmon in 2018, up 2.5 per cent from 2017, according to data from Statistics Norway.
This year Fearnley had expected volume growth of around 4 per cent.
The colossal death toll comes as Mowi, the world's biggest salmon farming company, which is also Norwegian, is being investigated over claims it has misreported the volume of chemical medications it uses to fight disease at its Scottish salmon farms.
Overuse of chemicals has disastrous impacts on the surrounding marine environment.
Farmed salmon stocks are already collapsing due to infestations of sea lice, which have in turn affected wild stocks. Last month, Mowi revealed the amount of gutted salmon it produced from Scottish waters had fallen by 36 per cent in a year, with infestations of sea lice and disease blamed. Open-net salmon farms, alongside climate change and soaring demand for salmon, are all blamed for impacting wild salmon populations, which have dwindled to the lowest levels ever recorded.
There are now no commercial wild salmon fishing stations operating in the UK due to the collapse in numbers.
"We had a major bloom here in upper Loch Fyne a fortnight ago," Alastair Sinclair, the national coordinator for the Scottish Creel Fishermen's Federation, told The Independent.
He said the overall impact of salmon farming was having a serious effect on the marine environment. "It's a huge risk to the inshore fishing industry in the sense that these farms are generally sited in sea lochs which historically have been known as breeding and spawning grounds for every species you could imagine."
There's basically no fish stocks left on the west coast.
It's become almost a marine desert, and the use of these chemicals (from the salmon farming industry) has not helped the situation - they are exacerbating it."
He added: "There are many concerned communities on the west coast where salmon farming takes place, who are worried the future has not been thought of here... We're all pretty worried."