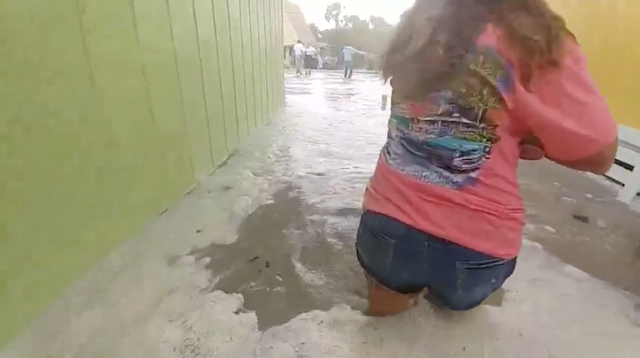 Photo credit ABC7
A tsunami, that's what meteorologists in the Fort Myers area say pushed this wall of water into cottages along Sanibel Island on Thursday.
The video shows people standing by Castaways Cottages of Sanibel that were experiencing some flooding and then out of nowhere a wall of water pushes forward.
No doubt you've heard of a tsunami, which is a giant oceanic waves triggered primarily by earthquakes that can roll ashore, causing loss of life and disaster.
But have you heard of meteotsunamis?
According to the National Oceanic and Atmospheric Administration, "a meteotsunamis are large waves that scientists are just beginning to better understand.
Unlike tsunamis triggered by seismic activity, meteotsunamis are driven by air-pressure disturbances often associated with fast-moving weather events, such as severe thunderstorms, squalls, and other storm fronts.
The storm generates a wave that moves towards the shore and is amplified by a shallow continental shelf and inlet, bay, or other coastal feature.
"Meteotsunamis have been observed to reach heights of 6 feet or more.
They occur in many places around the world, including the Great Lakes, Gulf of Mexico, the Atlantic Coast, and the Mediterranean and Adriatic Seas.
"Identifying a meteotsunami is a challenge because its characteristics are almost indistinguishable from a seismic tsunami.
It can also be confused with wind-driven storm surge or a seiche.
These uncertainties make it difficult to predict a meteotsunami and warn the public of a potential event.
However, NOAA scientists have identified atmospheric conditions that are likely to generate a meteotsunami and continue to work on ways to forecast them."
The Suncoast didn't experience anything quite like that Thursday or so far Friday, but the waves coming in have been much larger than normal.
Besides Sanibel Island, a tsunami-like wave crashed ashore on Captiva Island with many people sprinting for cover Thursday as a line of severe weather made its way on shore.
Meteorologists say unlike a traditional tsunami, this wave was also a meteotsunami because it is caused not by an underwater earthquake, but weather conditions above the surface.
The waves struck Thursday morning near the Castaway Cottages on Captiva Island.
According to witnesses, no one was injured, but it appears several of the cottages may have suffered water intrusion.
Meteotsunamis are rare but not unheard of.
Records show a similar wave hit Daytona Beach on 4th of July weekend in 1992.
Another incident was recorded more recently in Cleveland when a seven-foot wave swept ashore knocking beach-goers off their feet and swamping boats in the harbours.