The University Of Aberdeen has issued the latest depressing news of a catastrophic die-off: 70% decline of world population for seabirds since 1970 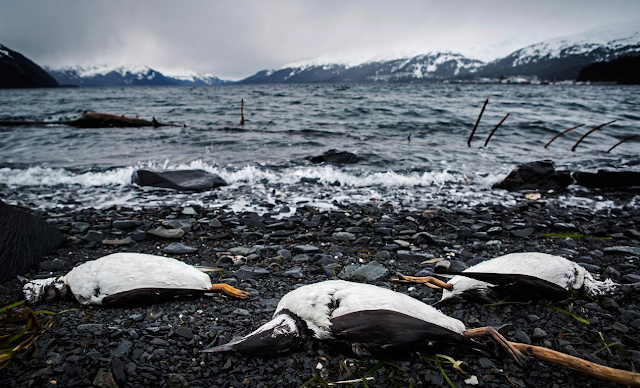 The University Of Aberdeen has issued the latest depressing news of a catastrophic die-off, this time the unfortunate species is the world's seabirds.
Due to overfishing, habitat destruction and pollution, populations have dropped by an incredible 70% since the 1970s, (can you imagine if the worlds human population fell by 70% in just 50 years?)
Scientists compared two time periods – 1970 to 1989 and 1990 to 2010 – to assess the degree of competition seabirds faced for prey species such as anchovy, mackerel and squid.
According to the Independent, the team then estimated the annual consumption of those prey species for nearly 300 varieties of seabird, based on population counts and models.
This was then compared to annual catches by fishing boats as contained in the Sea Around Us world database.
The scientists found that the total annual seabird consumption decreased from 70 to 57 millions of tonnes over the study period, while annual fishery catches increased from 59 to 65 millions tonnes over the same period.
"Our research shows, that despite the decline of the world seabird community between 1970-1989 and 1990-2010, competition with fisheries remained sustained," said the study's lead author Dr Aurore Ponchon from the University of Aberdeen.
"This competition was even enhanced in almost half the oceans.
"This enhanced competition, in addition to other factors such as pollution, predation by invasive species on chicks, the destruction and changes in their habitat by human activities and environmental changes caused by climate change, puts seabirds at risk, making them the most threatened bird group.”
She added: "This study calls for an improved management of the world's fisheries to alleviate competition pressure on seabird populations."

The Big Wobble has been reporting an unprecedented seabird die-off in Alaska and Canada since 2015.
Climate change is considered by scientists as a significant contributor to seabird declines with reports of British species such as terns and kittiwakes facing an uncertain future as sea temperatures rise.
Puffins, in particular, have suffered enormous losses in recent years and a report from the International Union for Conservation of Nature in April warned the iconic species was at risk of extinction.
Thousands of dead seabirds have been found washed ashore on sites from islands in the Bering Sea to villages north of the Bering Strait, signs of another large die-off in the warmed-up waters of the North Pacific Ocean. (The actual numbers will be in the millions as most will die at sea.)
The dead birds are mostly northern fulmars and short-tailed shearwaters, species that migrate long distances to spend summers in waters off Alaska and other northern regions, the U.S. Fish and Wildlife Service reported.
Also in the mix are some kittiwakes, murres and auklets, the federal agency said.
The cause is being investigated.
Necropsies so far show that the birds are emaciated - with no food in their stomachs or intestines and little or no fat on their bodies.
"Right now, we know that they are starving to death and can't hold their heads above water, and they're drowning," said Ken Stenek, a teacher in Shishmaref and volunteer in a program that monitors seabirds.
The precise toll is unclear.
The new die-off follows a massive loss of common murres in 2015 and 2016, 2017 and 2018, the biggest murre die-off on record in Alaska, and a precursor to near-total reproductive failures for murres in the Gulf of Alaska and Bering.
It also follows the deaths of thousands of puffins found last fall on St. Paul Island in the Pribilofs and, prior to that, mass deaths of murres and auklets along the U.S. West Coast.
In each death wave, starving birds have left emaciated carcasses, and each wave has been associated with unusually warm marine waters.