It's probably the most depressing Christmas story of 2018: reindeer and caribou herds have declined by 56 per cent! A loss of more than 2.6 million 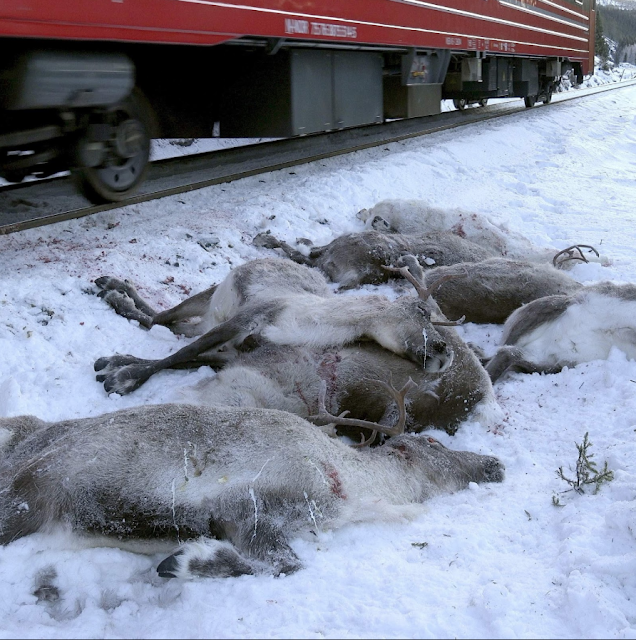 Sent in by Dr Carol Rosin
It's probably the most depressing Christmas story of 2018.
They are one of the most important animals in the already fragile Arctic ecosystem, the magnificent reindeer, or caribou and according to a new report is the latest animal to decline.
According to a report by NOAA, Despite an increase of vegetation available for grazing, herd populations of caribou and wild reindeer across the Arctic tundra have declined by nearly 50% over the last two decades.
The populations of reindeer, a.k.a. caribou, near the North Pole, has been declining dramatically in recent years.
Since the mid-1990s, the size of reindeer and caribou herds has declined by 56 per cent.
That’s an incredible drop from an estimated 4.7 million animals to 2.1 million, a loss of 2.6 million.

Ecologist Don Russell, the lead author of the report subsection on caribou, says it’s normal for herd sizes to fluctuate greatly. (By more than 50% Mr Russell?)
It’s part of a natural cycle: Herds can go from numbers in the hundreds of thousands to the tens of thousands in just a few decades, and then rebound.
“The fact that these herds are declining shouldn’t be a shock — they do it all the time,” Russell said by phone from the Yukon territory in Canada.
“But they’re at such low levels, you start to be concerned. ... If we return in 10 years and [their numbers] have gone down further, that would be unprecedented.”
The question now, he says, is “are their numbers so low they can’t recover?”
Climate change means the future of caribou, like that of so many other creatures, is uncertain
The herds have been declining in recent decades due to a complicated mix of factors including hunting, disease, diminished food availability, and climate change, the report explains.