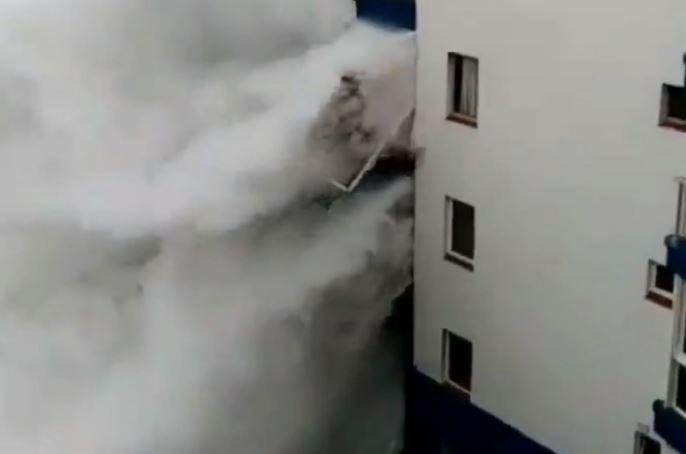 Photo The Sun
Holidaymakers have been evacuated from a seafront apartment block after huge 40ft, more than 12-meter waves wiped out balconies in Tenerife.
Dramatic footage shows huge waves crashing into the fourth-floor of an apartment block in Mesa del Mar, popular with Brits.
Fierce storms led to restaurant windows being smashed, cars swept into the sea and a football pitch is destroyed by severe floods on the tourist island.
Local mayor Alvaro Davila said 65 apartments, some believed to be holiday homes, were evacuated. He also confirmed nobody had been injured in the scare, which led to 39 people being ordered to leave two buildings in, north-west Tenerife.
It is not known if any of Brits were caught up in the incidents.
The incidents happened after regional government officials issued a severe weather warning as a fierce storm battered the north of Tenerife and other parts of the Canary Islands.
Garichico was one of the worst affected areas, with waves crashing over the sea wall and flooding streets to the astonishment of locals who filmed the water racing towards them as they ran for safety. Further south, in the holiday hotspot of Adeje there were also reports of waves breaking the windows of a hotel restaurant, although again there were no injuries.
The first evacuations were carried out around 10 pm on Saturday night, with more following around 2 am.
Many of the homes evacuated in Mesa del Mar are holiday homes.
It is not known if any Brits were among those asked to leave their apartments, although the town is popular with holidaymakers and has two natural swimming pools which are a big draw with locals and day visitors.
Parts of Malaga were also hit by heavy downpours with Mijas, Ojen and Coin all badly affected. Hotel Playa in Las Chapas caught fire after it was hit by lightning.
Streets in Marbella have become virtual rivers due to the rain.