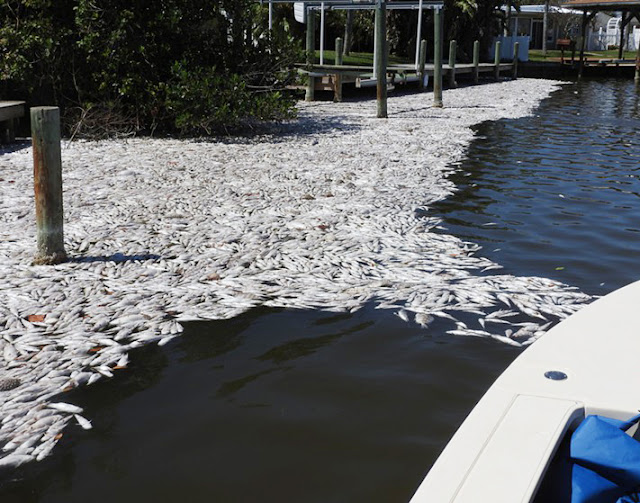 Photo earthjustice.org
Hurricane Michael didn't wash away the red tide.
Just ask Skip Miller.
A Bayshore Drive resident, Miller woke up Wednesday morning to find what he described as "tens of thousands" of small dead fish that had washed up to his dock on Choctawhatchee Bay.
He said he assumed the culprit was red tide, and that the majority of the fish were bait fish, with some catfish and redfish in the mix.
"It's going to be a major nightmare for me," Miller said.
He contacted Walton County officials, only to learn that the county has no cleanup David Demarest, the director of communications for the Walton County Tourist Development Council, said that the organization aids in the cleanup of public beaches, but those private bayfront areas were the owner's responsibility.
According to the Walton Sun.com, Red tide remains in Northwest Florida and is still being found in high concentrations in Santa Rosa County, the Florida Fish and Wildlife Conservation Commission reported.
The Commission said fish kills had been reported in Okaloosa and Walton counties and complaints of respiratory irritation were lodged during the last week in Okaloosa County.
K. brevis is the bacteria occurring in salt water that causes red tide in Florida. High concentrations are reported when the bacteria concentrations exceed one million cells per litre of water.
The Fish and Wildlife report said the three-day forecast for counties in Northwest Florida calls for the red tide to move to the southwest on the water’s surface and to the east below the water’s surface.