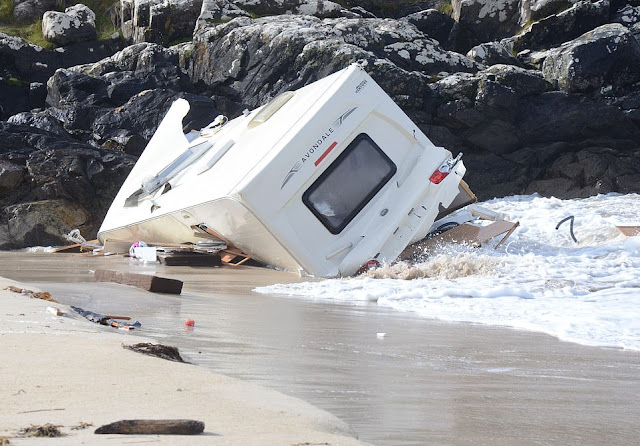 
Ireland and the UK are cleaning up after the biggest ever storm to hit the Northern Ireland in September.
Wind gusts of150 km/h caused chaos.
A woman from Switzerland died when her caravan was blown off a cliff in County Galway onto the rocks below.
A man in his 20s died when a tree fell on him as he worked in a country park near Newry in Northern Ireland and a pilot was filmed attempting to land during Storm Ali at Dublin Airport yesterday but as the plane got closer to the ground the jet started to lift and continued flying.
Heavy rain and strong winds are set to once again batter parts of the British Isles today after two people were killed as the first named storm of the season brought with it gusts of 160km/h  yesterday. A new weather system moving in from the Atlantic has prompted a warning of possible flooding and further travel disruption after storm Ali wreaked havoc as it swept across Britain and Ireland.
Power networks are working to restore power to 140,000 homes, farms and businesses left without power as Storm Ali, the first named storm of the season wreaked havoc across the UK and Ireland.
A spokesperson said: "Gale force winds from Storm Ali with gusts of over 160 km/h have caused damage to the electricity network affecting more than 140,000 homes, farms and businesses.
"The damage is mainly attributable to fallen trees on overhead lines as a result of the high winds. "ESB Networks crews have been dispatched to the most affected areas, making the electricity network safe and assessing the damage, so that they can restore power as quickly and effectively as possible.
The UK has been battered by Storm Helene and Storm Ali this week and the dangerous 80mph winds caused a waterfall to reverse, captured in the mesmerising footage.