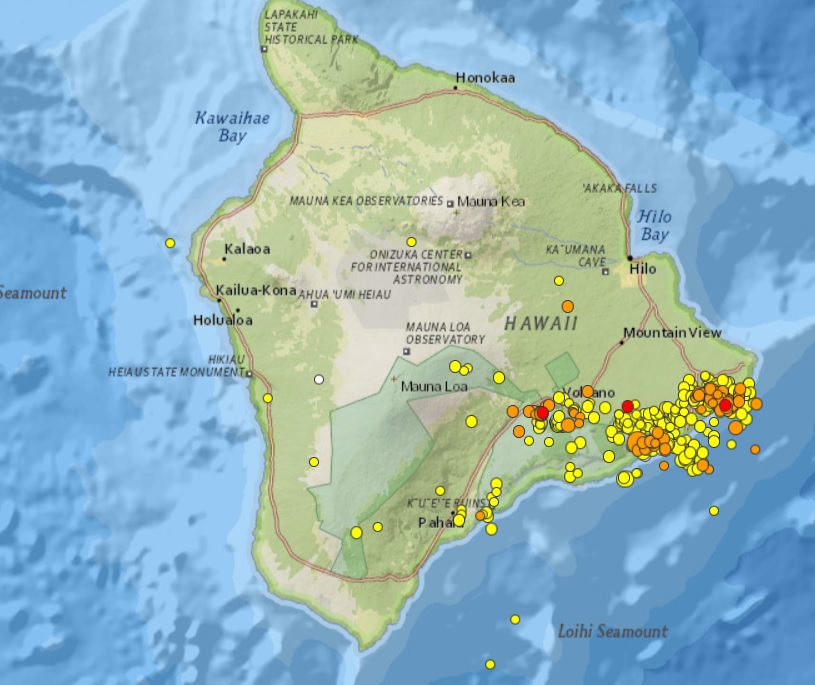 Map USGS
Hundreds of earthquakes in Hawaii are shaking the eastern side of the Big Island, and authorities are concerned that the Kilauea Volcano could erupt.
The US Geological Survey revised the magnitude of the most severe quake to a 5, from the 4.6 reported earlier.
It hit at 10:30 a.m. local time on Thursday.
Within half an hour, two more quakes came, registering at 2.5 and 2.7.
There have been a total of six smaller earthquakes since the biggest one, the agency said.
County spokeswoman Janet Snyder said authorities have issued a mandatory evacuation order for a portion of Leilani Estates, a subdivision in the Puna District on Hawaii Island.
The frequency of the minor earthquakes decreased Thursday compared to the preceding days, the Hawaii County Civil Defense Agency said in a statement.
However, the Hawaiian Volcano Observatory has indicated that a volcanic eruption was "possible but not imminent," the agency said.
Residents in the area should prepare and review emergency plans in case of evacuation, the civil defence agency warned on Wednesday.
Officials are keeping watch on Kilauea, which is one of the world's most active volcanoes.
It's located in the Hawaii Volcanoes National Park, which has since closed off nearly 15,700 acres due to "the possibility of a new eruption and unstable geologic activity."
But most of the park remains open, according to its statement. Since Monday, hundreds of earthquakes -- most of them around 2.0 magnitude -- have been recorded in the area.
The series of earthquakes came after a collapse of a crater floor of Pu'u 'O'o, which is a volcanic cone in the eastern rift zone of the Kilauea Volcano.
Since that collapse, about 250 earthquakes were reported in the area on Tuesday evening, according to a Hawaiian Volcano Observatory status report.
The tremors have been going on for days now, jarring residents, who've been reporting nearly constant ground vibrations in some areas.
"It has now become unnerving," Carol Shepard, a resident, told CNN affiliate KHON. She said the flurry of earthquakes seemed to happen every minute.
"It'd be like the house would shake.
It'd be like somebody that weighs 300 pounds came in my living room, and jumped up and down," she said. Residents in the area have also reported cracks emerging on roads.