Chemtrails the truth! Chemtrails cause heart and lung disease in humans and animals and are destroying plant life and eco systems 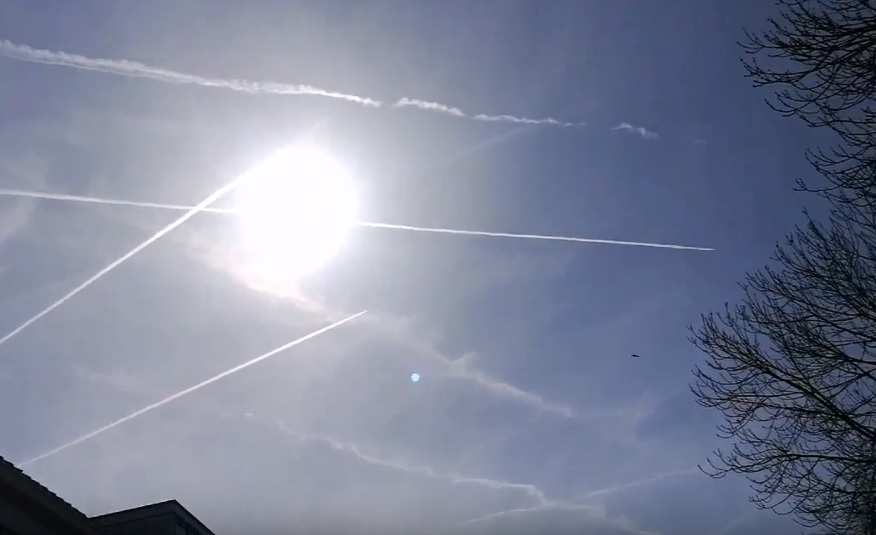 The sky above my garden last week, within minutes the blue was replaced by a sickly yellow.
Last week the first signs of summer arrived in Holland and under a clear blue sky, I decided to sit outside under the sun listening to the incredible bird chorus which is prevalent this time of the year.
Within minutes jet planes were filling the sky with sickly expanding plumes which within an hour had turned the blue sky into a dull yellow.
Chemtrails are real.
This morning I received an email from a friend regarding chemtrails and one man's fight (Dane Wigington) to bring the chemtrail danger to our attention.
Below is the email which arrived this morning...

Solar geoengineering is controversial, and for good reason. It describes a set of technologies that seek to reflect a small fraction of sunlight back into space to cool the planet. The most prominent such technology involves deliberately injecting tiny reflective particles into the stratosphere.
There’s a serious debate worth having, both on the science and technology itself and on the societal and policy implications. Unfortunately, in some corners of society valid concerns over the impacts of solar engineering have been overtaken by a different set of fears—various versions of the so-called chemtrails conspiracy theory.
The global climate engineering assault is becoming all but impossible to hide in plain sight as the climate and biosphere collapse accelerates.
In response, the power structure's propaganda puppets are doing all they can to continue their attempt to cover up the critical climate engineering issue with carefully crafted disinformation.
How do we counter the climate engineering cover-up campaign of disinformation?
By knowing the building block data and facts relating to this issue, by sharing credible data with others, and by holding the propagators of propaganda publicly accountable for their criminal disinformation campaigns.
“Earther.com" has just published a climate engineering cover-up article of disinformation authored by Gernot Wagner (further down in this post).
Below is my response (Dane Wigington) to Mr Wagner which was forwarded to his email contact hello@gwagner.com

In regard to your recent article “Chemtrails Aren’t The Geoengineering Debate We Should Be Having Because Chemtrails Aren’t Real" yes, “chemtrails” (the term you chose to rely on in your article) is not a science term, and thus not “real”.  This being said, Mr. Wagner, geoengineering / climate engineering / solar radiation management / stratospheric aerosol injection / cloud albedo enhancement, etc., are verifiably (semantics matters) ongoing realities. This fact / conclusion becomes apparent to any who have the courage to do an honest investigation of available data / documents / lab tests / film footage / photographic evidence, etc. In your article your denial of climate engineering relies on a survey conducted by geoengineer Ken Caldeira in which scientists were asked if “chemtrails” were “real”. Were you aware, Mr. Wagner, of a similar survey (of the very same scientists and 1430 more) which used the science terms in the survey? When the actual science terms were utilized, "climate engineering", "geoengineering", "solar radiation management", "cloud albedo enhancement", 100% of the scientists surveyed refused to deny the climate engineering reality on the record. A legal team working directly with GeoengineeringWatch.org is actively pursuing legal avenues to force public disclosure of the illegal climate engineering operations. In addition to our legal action in Canada, our ongoing lawsuit against the US Department of Commerce (the overseeing agency for NOAA) will soon produce thousands of documents relating to the weather / climate modification / engineering operations (documents which the DOC / NOAA have been ordered to release to us). Mr. Wagner, your strategy of obscuring the climate engineering reality by attempting in your article to associate this subject with fringe theories is nothing new in disinformation circles. In your article you correctly address the grave dangers posed by atmospheric particulate pollution, yet you do all you can to divert your readers attention from climate engineering as a major source of atmospheric particulate pollution. In a 2011 report NOAA admitted on the record that atmospheric aerosols have skyrocketed since 2000 and the source of this escalation could not be identified. Why wouldn’t (or couldn’t) NOAA acknowledge geoengineering atmospheric aerosol dispersions as a source of particulate pollution? In addition to US government scientists having no first amendment protection, and in addition to confidentiality agreements being standard for so many government positions and posts, now there is the illegal federal “gag order” on all National Weather Service and NOAA employees to consider. Why no mention of these facts, Mr. Wagner? Whatever your motive for participating in what can only be considered a campaign of climate engineering cover-up, rest assured that we, at GeoengineeringWatch.org, will do our best to publicly expose you (and all those like you who are participating in the climate engineering cover-up) to populations that deserve to know the truth about the ongoing highly destructive and dangerous geoengineering programs that were long ago deployed without public knowledge or consent.


Below is a link to the post we have just put up featuring your article of deception and disinformation,
FYI
http://www.geoengineeringwatch.org/climate-engineering-disinformation-how-to-respond-to-the-source/

It is unfortunate (but not surprising) that you are unwilling to engage in a live on-air factual debate.