"Pacific Rim of Fire" Island of Ambae Vanuatu declared state of emergency after the latest volcano eruption as 11,000 prepare for evacuation 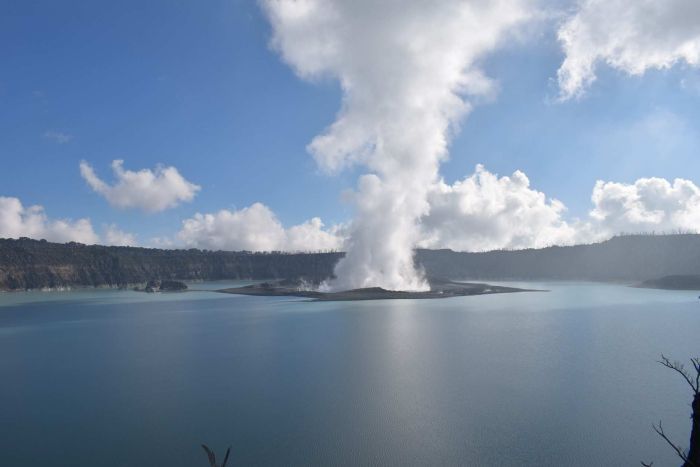 Photo abc.net.au
Vanuatu authorities have declared a state of emergency after the latest volcano eruption on the northern island of Ambae.
Villagers on the Vanuatu island of Ambae were facing their second evacuation in seven months Friday after a volcano rumbled back to life and rained ash on their homes.
According to AFP authorities in the Pacific nation have declared a state of emergency on the northern island, where 11,000 people were forced to leave last September.
Many have only just returned home but the Vanuatu Meteorology and Geo-Hazards Department said the Manaro Voui volcano was undergoing a level three eruption, the mid-point in a five-level scale.
National disaster ministry director general Jesse Benjamin said any evacuation would be more orderly than the one carried out in September when a flotilla of small vessels was pressed into service to rush people off the island.
Houses are collapsing and trees are falling from the weight from a heavy ash fall from the volatile volcano.
The same volcano caused a desperate Dunkirk-style evacuation on the northern island of Ambae last September as a flotilla of boats rescued islanders from the erupting volcano.
Recent reports indicate that ash fall covered most of north, east and west Ambae Tuesday night with close to 1cm of ash being measured in some villages on north Ambae.
“The situation is becoming critical in some areas with trees falling and blocking roads.”
Vanuatu, which has a population of about 280,000 spread over 65 inhabited islands, is regarded as one of the most disaster-prone countries in the world.
It sits on the so-called "Pacific Rim of Fire" making it vulnerable to strong earthquakes and volcanic eruptions, while powerful cyclones also regularly lash the islands.