Days after zone was reduced from a radius of 10km Bali's Mount Agung erupt's again on Thursday spewing ash 2.5km into the Indonesian sky 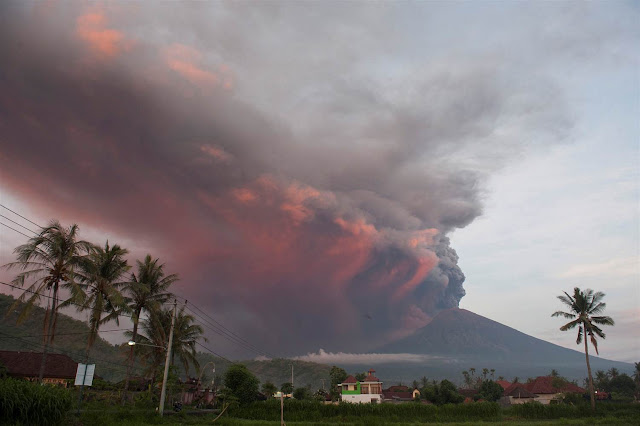 PHOTO nbcnews.com
Bali's Mount Agung erupted again on Thursday, sending thick ash and smoke up to 2.5km into the sky, according to Indonesian authorities.
The danger zone around the volcano remains at a radius of 6km from the crater, according to Sutopo Purwo Nugroho, spokesman for Indonesia's Disaster Mitigation Agency.
The zone was reduced from a radius of 10km last week.
Nugroho said the volcano still shows a high intensity of volcanic activity, despite the shrinkage of the danger zone.
More than 50,000 people from 12 villages included in the danger zone are still staying at 233 refugee shelters, he said.
Nugroho also said that the ash only affected several areas to the north and northeast of the volcano, and did not interfere with the operation of the island's I Gusti Ngurah Rai international airport.
People are going about their daily activities as usual and no one was panicked over the latest eruption.
The volcano has been spewing lava and ash since November, prompting the authorities to raise the status to the highest level, which remains in place.
The airport was once closed for three days, while another international airport in the neighbouring Island of Lombok was also temporary closed briefly.