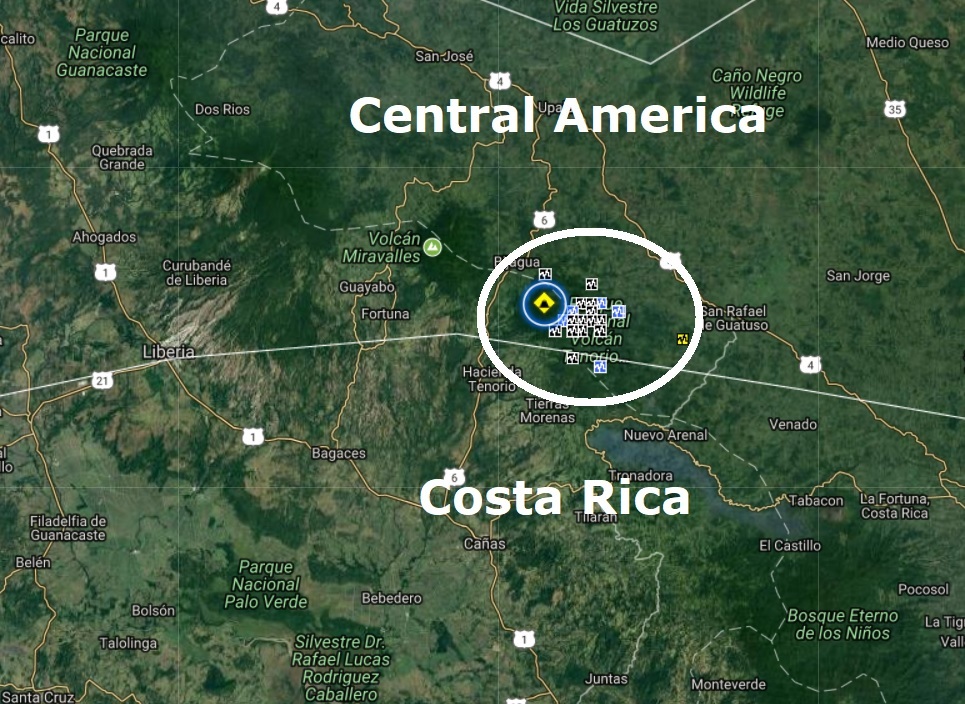 RSOE Alert map
The seismic swarm recorded since Tuesday on the eastern flank of the Tenorio volcano, in Guanacaste, was the reason for the decision made on Thursday afternoon to close off indefinitely, as a preventive measure, the National Park to tourists and local officials.
"The earthquakes were relatively strong and the park was closed so as not to put visitors at risk. Depending on the conditions, it will reopen, but tomorrow (Friday) we will do an inspection to see the state of the trails and assess whether there are rocks or trees in danger of falling," explained Alexander Leon, director of the Arenal Tempisque Conservation Area (ACAT).
Authorities reported that the swarm began after the 7.8 magnitude earthquake in Honduras on Monday, whose epicenter was located 44 kilometers from the Islas del Cisne (Swan Islands), a chain of three islands located in the northwestern Caribbean Sea, approximately 153 kilometers off the coastline of Honduras.
According to experts, seismic waves move through and around the earth, on occasion, can cause some (seismic) faults to activate.
Leopold Linkimer, a specialist of the Red Sismologica Nacional (RSN) - National Seismic Network, said that the term swarm is used when several tremors of similar magnitudes occur in the same epicentral location, separated by a short time, but with spatial or temporal ranges that are difficult to determine.
"Preliminarily we associate the movements with the Cano Negro and Chiquero faults, but we continue working with the methodologies that allow us to know the origin of the tremors," explained Linkimer.
So far, the seismic activity has been perceived mostly in Tilaran, Guanacaste and Bijagua de Upala, Alajuela; However, residents of Bagaces, Alajuela, La Fortuna, Ciudad Quesada, Puntarenas, Esparza, Abangares and Santa Cruz also reported tremors.
In addition, in Aguacaliente de Bagaces, residents reported the falling of light objects during Thursday's 5.3 magnitude 'event' that occurred at 1:57 pm.
The RSN reports 12 tremors in three hours on the east flank of the Tenorio, the most intense a 5.1 magnitude.
On the other hand, renowned local vovolcanologist Marino Protti, said the Tenorio volcano has never experienced a seismic swarm, for this the Observatorio Vulcanologicoy Sismologico de Costa Rica (Ovsicori) will also keep monitoring the volcano.
He added that at the moment there are no reports of changes in the volcano due to tremors.
Another effect of the seismic swarm is that the Celeste River, inside the Tenorio National Park, changed its coloration and now is a brown tone.
The Celeste River is notable for its distinctive turquoise coloration.
According to geologists, seismologists and volcanologists, the change can be due to two factors: the first is that a landslide and the second that, due to movement, a rise in river sediments.
ACAT Leon said that they hope that in the next few days geologists will be able to go to the site to collect data and determine if in fact the change of coloration is associated with earthquakes.
This is not the first time that the Celeste River has a variation in its color, in 2002 and in 2016 similar events were reported after earthquakes in nearby areas.
Precisely, in July 2016, three earthquakes of 5.3, 4.0 and 5.1 magnitude, occurring in a span of 18 minutes, destroyed three houses and caused damage to six others.
All the properties were located in Armenias and Bijagua de Upala.