Vanuatu launches a Dunkirk-style evacuation on the northern island of Ambae as a flotilla of boats rescues islanders from an erupting volcano. 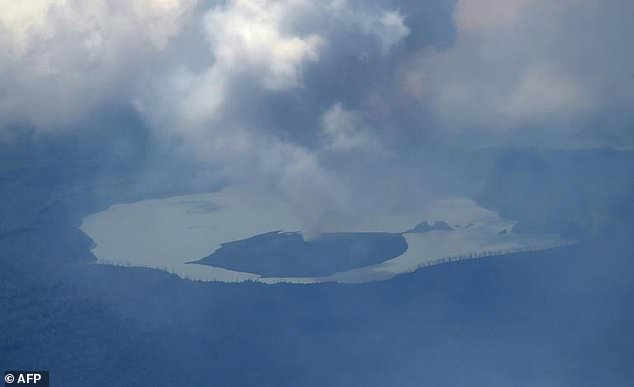 Photo AFP
Vanuatu has launched a Dunkirk-style evacuation on the northern island of Ambae as a flotilla of boats rescues islanders from an erupting volcano.
The eruption has polluted many of the island's water sources leaving thousands of people in need of safe drinking water, Red Cross delegate Joe Cropp told Reuters by phone on Sunday.
"Water is crucial," he said.
"It's important to get on top of it right away."
The Manaro Voui volcano, the nation's largest, was seen hurling steam and rocks into the air by New Zealand vulcanologist Brad Scott who flew over the volcano on Saturday.
"Maybe about every 8 to 10 seconds there was an explosion, throwing lava bombs up maybe 50 to 100 meters above the crater and there's also two small lava flows that are flowing across the island into the lake as well," he said in an interview with Radio NZ published on Sunday.
Crowds of islanders from at least three evacuation points on the island have begun boarding a flotilla of ships including ferries, canoes and commercial vessels for the safety of surrounding islands Maewo, Pentecost and Santo.
The Vanuatu Government wants all 11,000 islanders evacuated by Oct. 6.
Australia sent amphibious Bay Class landing ship HMAS Choules on Saturday to help move the population, and it is expected to arrive by the middle of the week.
Some islanders are flying out while others have already moved to stay with friends or relatives in the capital, Port Vila. More than 6000 people have gone to emergency shelters on the South Pacific island in preparation for the total evacuation.
Manaro Voui stirred to life in September, threatening island residents with burning ash, toxic gas and acid rain.
The volcano is crowned by crater lakes.
One of them, Lake Voui, is directly on top of the eruption making it dangerously explosive and posing the deadly threat of a lahar: a boiling mud flow down the side of the mountain, Macquarie University vulcanologist Christopher Firth told Reuters by telephone on Saturday.