Gas water and mud bubbling from a hole in the ground have experts worried as a hydrothermal mud volcano appears from nowhere on a Trinidad street! 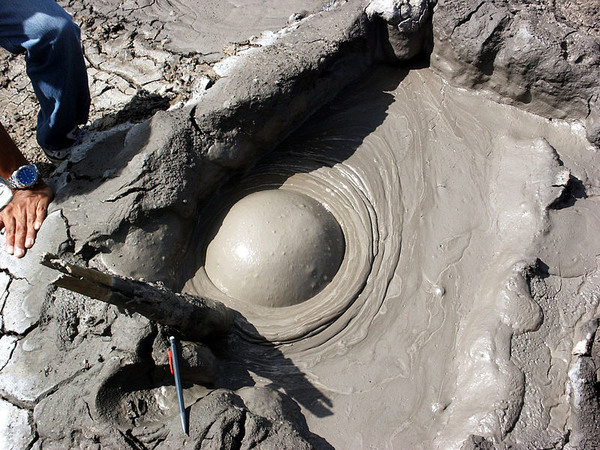 Photo atlasobscura.com
The Environmental Management Authority (EMA) says it received a report last Wednesday of water and mud bubbling from a hole in the ground in the vicinity of LP 22 Macaya Trace, Munroe Road, Cunupia.
An initial assessment conducted by the EMA on the same evening revealed that in addition to water and mud bubbling from the ground, heat/ steam and unknown pungent gas were being emitted. Further, there was no pipeline or associated infrastructure in the vicinity of the site.
The EMA in keeping with its coordinating role notified several agencies to assist with the further assessment of this phenomenon namely, ODPM, MEEA, UWI Seismic Research Unit, NGC, Geological Society of Trinidad and Tobago and the American Association of Petroleum Geologists (AAPG) Young Professionals Trinidad and Tobago Chapter.
A joint site visit with geologists and seismologists from UWI took place the following day and it was determined that the feature is a hydrothermal mud volcano.
Subsurface waters are being heated along deep faults and brought up to the surface at this site.
This feature appears to be the first occurrence of this kind within the Caroni Basin.
This morning, another site visit was conducted with the NGC and the TPRC and all activity at the site has stopped and no toxic or flammable gases were detected.
The EMA will continue monitoring the site and keep communications open with the relevant agencies in the event that the site becomes active again.