Another cluster of small to medium quakes hit Soda Springs near Yellowstone National Park as total stands at more than 2,400 since June 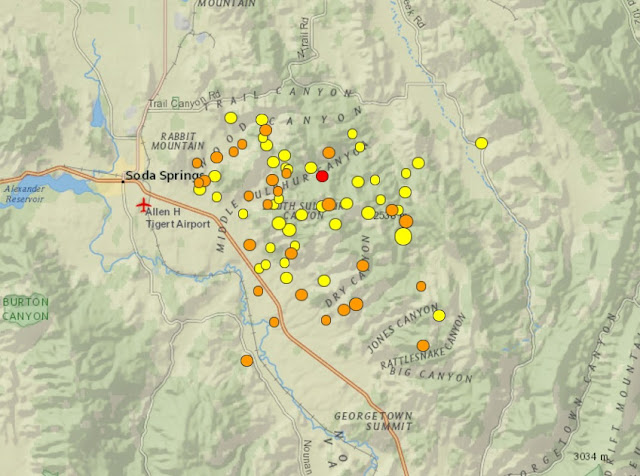 USGS showing a cluster of 70 small to med affecting the area in the last two days...
Another round of small to medium quakes hit the has rumbled through southeast Idaho, just 60 miles south of Yellowstone National Park.
There were no immediate reports of damage or injuries.
The epicentre of the quakes is located 11 miles east of Soda Springs, Idaho, but the tremors where also felt in Wyoming, and across northern Utah in Logan, Ogden, Salt Lake City, Draper and Provo. 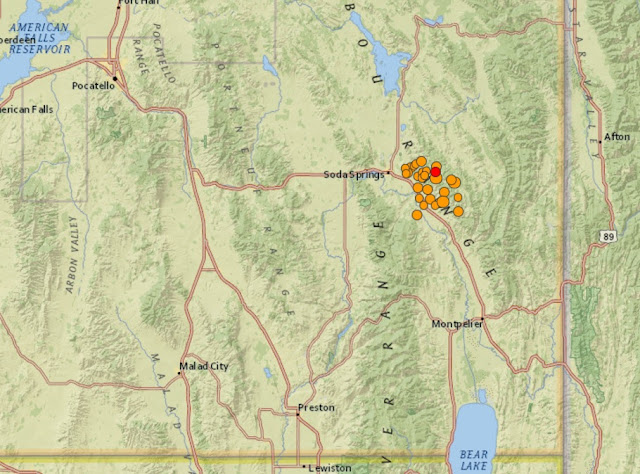 Yesterdays new cluster..
The new cluster of more than 70 small to medium quakes in just two days just 60 miles from Yellowstone is part of a recent ongoing earthquake swarm at Yellowstone volcano and is now one of the biggest ever recorded, with over 2,400 tremors since it began in June.
As of August 30, 2,357 earthquakes had been recorded.The most powerful in recent weeks was magnitude 3.3; it took place on August 21.The most powerful in the current swarm was a magnitude 4.4, which was recorded on June 15.Yesterday's mag 5.3 is by far the biggest.

The Big Wobble has been monitoring the situation since June with several updates below...