Mag 6.6 - North of Ascension Island is the 5th major quake in August: Only 3 mag 7 quakes or higher so far in 2017 could be the lowest mag 7+ count in modern history 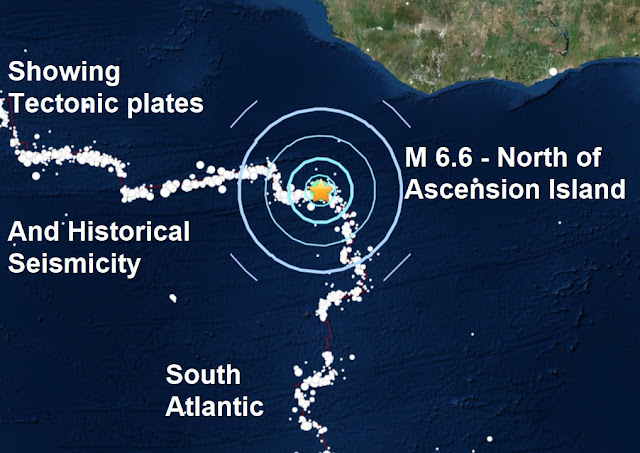 USGS
A shallow, magnitude 6.6 - North of Ascension Island is the 5th major quake in August and the 60th of 2017.
Green alert for shaking-related fatalities and economic losses.
There is a low likelihood of casualties and damage.
Based on the earthquake location near the Mid-Atlantic Ridge, a damaging tsunami is not expected.

It is turning out to be an incredible low count for major quakes in 2017, as we move toward Sept, the 9th month, this years count is way down at 60 and does not look like the annual total will reach three figures which is unprecedented in many decades and could be the lowest total since the 1940's...
What is even more remarkable though is the lack of major quakes mag 7 or higher.
2017 has seen so far only 3 quakes at mag 7 or higher, the biggest being the mag 7.9 in Papua New Guinea, way back in January, nothing has been recorded in the mag 8 range which is also highly unusual and could be the lowest mag 7+ count in modern history.