Terror comes to Barcelona: Van plows into one of Barcelona's main tourist streets killing at least 4 and injuring dozens 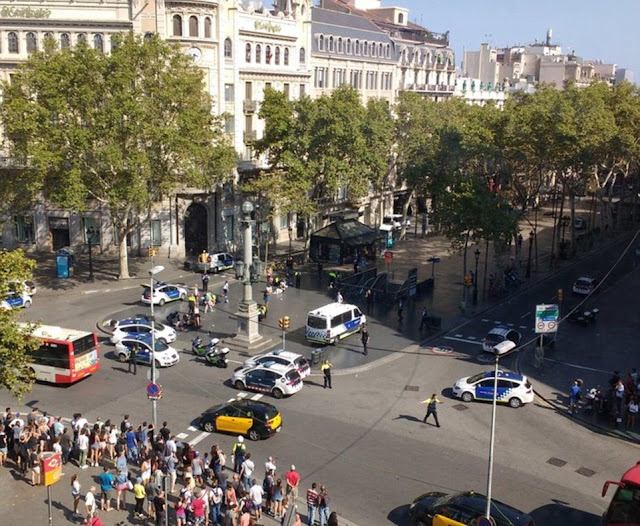 Photo Daily Mail
A new terror attack is unfolding in one of Barcelona's main tourist streets in the middle of the tourist season.
A white van jumped the sidewalk in this city's historic Las Ramblas district and crashed into a summer crowd of residents and tourists, killing at least 4 and injuring dozens of people,police said Thursday.
Some reports claimed the terrorists targeted a popular kosher restaurant named 'Maccabi'.
The Spanish newspaper El Pais quoted unnamed police sources as saying that armed perpetrators of the crash were holed up in a bar in Tallers Street with hostages.
There was no immediate police confirmation of the report.
In a photograph shown by public broadcaster RTVE, three people were lying in the street after the afternoon incident and were apparently being helped by police and others.
Police cordoned off the broad, popular street, ordering stores and nearby Metro and train stations to close.
They asked people to stay away from the area so as not to get in the way of emergency services.
A helicopter hovered over the scene.
Las Ramblas, a street of stalls and shops that cuts through the center of Barcelona, is one of the northern city's top tourist destinations.
People walk down a wide, pedestrianized path in the center of the street, but cars can travel on either side. The president of the government of Catalonia has called for "maximum caution" in the wake of the terrorist van attack in Barcelona. He added that "all the attention" should be on the victims of the attack. Around 80 people are currently sheltering in a church in Barcelona near the incident. Witnesses say that the doors are currently locked as reports circulate that there are possibly two armed men in a bar in the local area.