Almost 100,000 evacuated or advised to leave northeastern Japan as more freak rain hits after 25 people dead in severe floods earlier in the month 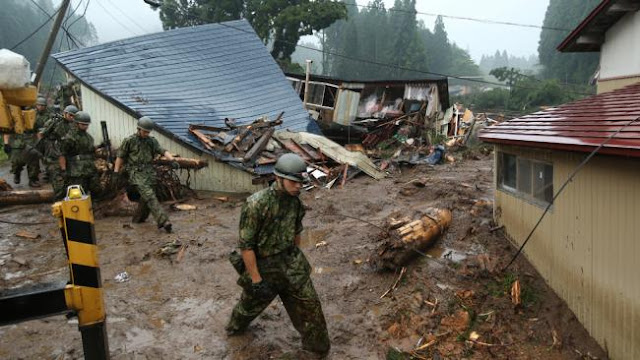 Photo weather.com
As Tropical Storm Noru lingers off the eastern coast of Japan tens of thousands of people in northeast Japan were told to evacuate their homes on Sunday as heavy rain caused major flooding and cut some rail links, authorities said.
The storm follows freak rains in southwestern Japan earlier this month that left at least 25 people dead.
Almost 25,000 people in Akita prefecture were ordered to evacuate and around 65,000 more people were advised to leave or told to prepare to leave the area, an official at Akita prefecture told Reuters. Several rivers were flooding and more than 100 houses had been inundated by floodwaters, the official said.
No injuries or deaths have been reported, but the authorities were still investigating, he added.
Some bullet trains running to and from Akita have been suspended because of the heavy rains,
East Japan Railway said on its website.
"There is a significant amount of water accumulating in the land.
Even if the heavy rains stop, we will continue to warn people to stay vigilant," the Akita prefecture official said.