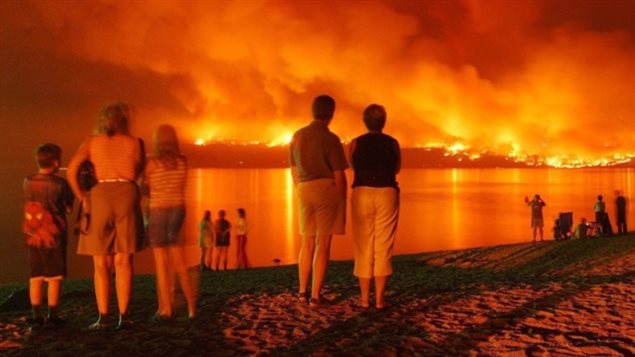 Photo ici.radio-canada.ca
A seasoned British Columbia firefighter says he's never seen anything like the fast-moving wildfire that is sweeping the area.
British Columbia may ask for more help if its wildfires worsen, the western Canadian province said on Friday after the federal government sent 225 additional soldiers to battle blazes that have been spreading rapidly in hot, dry weather.
While rain is expected over the weekend, many parts that are burning are expected to miss it entirely, and winds in some parts could escalate the blazes, fire information officer Navi Saini said on a conference call.
"We also are in ongoing discussions with the Canadian Interagency Forest Fire Centre," she said.
"We do have the option of requesting more resources."
In total, there are now 375 Canadian soldiers along with 3,600 firefighters and emergency responders tackling the flames, which have forced around 45,000 people to evacuate their homes over the past two weeks.
Nearly 170 wildfires are blazing across the heavily forested province, affecting 405,000 hectares and prompting the provincial government to declare a state of emergency.
The province has spent C$117.9 million ($94.05 million) tackling the fires, whose numbers on Friday included 32 new ones since Thursday, Saini said.
Federal government ministers promised to send more help as the situation unfolds.
"We are committed to providing a coordinated federal response to the people of British Columbia," Canada's public safety minister, Ralph Goodale, said in a statement.
Royal Canadian Mounted Police spokeswoman Annie Linteau said an advance team from the military has been working with local authorities for the last 36 hours.
"Our Canadian forces colleagues will be joining us, the RCMP and other police personnel, at various checkpoints ... by tomorrow morning," she said.
Linteau said at least one fire, which has destroyed buildings, may have been human-caused, and that investigators are probing the issue.
British Columbia declared its first state of emergency since 2003 on July 7 as gusty winds fanned fires that were caused by lightning and humans in the tinder-dry central and southern regions.
The fires have shut mines and timber operations and damaged homes and electrical infrastructure. Major pipeline companies in the region, including Kinder Morgan Canada Ltd, a unit of Kinder Morgan Inc, have created fire breaks, installed sprinklers and taken other measures to protect operations.
On Thursday, a low pressure system tracked across British Columbia, bringing heavy showers and cooler temperatures, although emergency officials said the rain was sporadic and only fell in certain areas.
xx
Home
at July 22, 2017