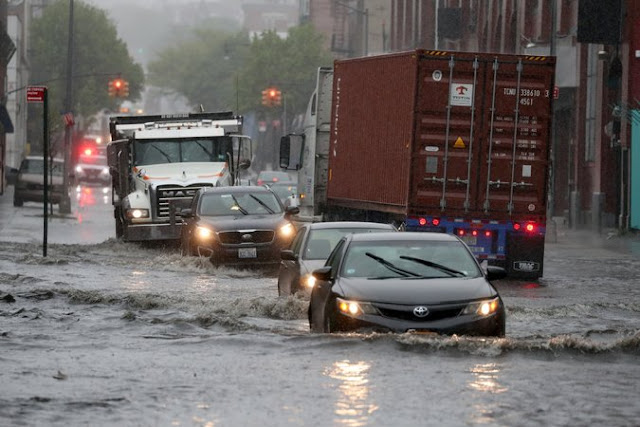 Cars attempting to drive though a flooded street in the Gowanus neighborhood of Brooklyn on Friday. Credit Andrew Gombert/European Pressphoto Agency

Record-breaking rains caused flooding in the city and flight delays in the region on Friday.
Two tracks at Penn Station were out of service because of flooding, and parts of West Side Highway, along the Hudson River, were closed in both directions.
A National Weather Service meteorologist said 3 inches of rain fell in Central Park, almost double the previous May 5 record of 1.55 inches in 1871.
The roof of the $4 billion transit hub at the World Trade Center leaked during the heavy rains.
A spokesman for the Port Authority of New York and New Jersey, which runs the facility, said World Trade Center officials had identified the areas where the leaks occurred and would take steps to mitigate future problems.
The transit hub, which doubles as a high-end shopping mall, opened last year after years of delays and cost overruns.
Flooding disrupted service on several subway lines and PATH lines between New York and New Jersey.
Online images showed waterfalls cascading around columns beneath the Gowanus Expressway in Brooklyn. Taxis and cars crossing Central Park and parts of Staten Island were up to their hubcaps in murky water.
Flight-tracking website FlightAware said New Jersey's Newark Liberty International Airport was seeing inbound flight delays of about three hours.

There were as many as 2,500 cloud-to-ground lightning strikes recorded during the thunderstorm that knocked out power to thousands and flooded roadways across Western Washington Thursday.
It was one of - if not the - most active severe weather day since the mid-1980s, according to data from the National Weather Service.
Eight Severe Thunderstorm Warnings were issued, which is more than in the past five years combined, according to KIRO 7 Meteorologist Morgan Palmer.
Fewer than 10,000 Puget Sound Energy customers are without power.
Only a handful of Seattle City Light customers are in the dark.
A number of drivers were trapped for hours by the storm that knocked down a power pole.

At least 14 levees along the Missouri River in Missouri are losing the battle against floodwaters.
The Missouri Levee and Drainage District Association said Thursday that seven levees have been overtopped by water and seven more have been breached, with water pouring through them.
The levees are in rural areas and the impact is mostly on farmland.
Portions of the Missouri and Mississippi rivers remain well above flood stage.
Up to a foot of rain fell in parts of Missouri last weekend, and much of the central U.S. has seen several additional inches of rain over the past two days.
The worst flood damage has been along smaller rivers like the Black River in southeast Missouri and northeast Arkansas, and the Meramec River in suburban St. Louis.
Officials are warning of the dangers left behind by a devastating flood as hundreds of displaced residents prepare to return to their homes along the Meramec River in suburban St. Louis.
The Meramec reached record and near-record levels at several towns after torrential rains last weekend caused a sudden jump in the river level.
At least 200 homes and dozens of businesses were damaged.
Missouri is among several states in the central U.S. where dangerous floods have occurred.
Nine deaths are blamed on the flooding. St. Louis County officials are warning that floodwater can contain raw sewage, chemicals and others dangers.