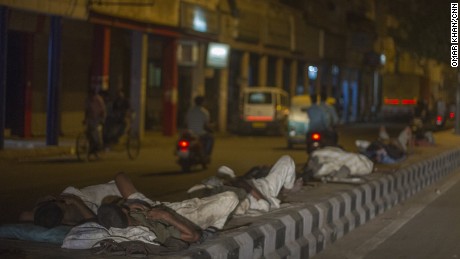 Photo cnn.com
It's the kind of temperatures which melt cars and roads and was responsible for thousands of deaths in India and Pakistan last year.
The heat wave in Chattisgarh is touching new highs each day. On Monday, Bilaspur witnessed 49.3 degrees Celsius, the highest temperature recorded in the state for the first time.
While Raigarh and Bhilai are known to record higher temperatures, Bilaspur has been witnessing intense heat in the past few years.
"We are analysing factors that have led to high temperature.
We had issued a heatwave warning earlier," said P Khare, Director of Meteorological Department, Chhattisgarh.
Raipur, which is at a distance of approximately 110 km from Bilaspur, recorded a temperature of around 44-45 degrees Celsius.
While Bilaspur and Raipur normally have a temperature difference of 1 degree, weathermen are shocked at the sudden gap of 4.5 degrees.
Reports say that cutting of trees in Bilaspur is one of the biggest reasons for intense heat in the area. Chattisgarh Chief Minister Raman Singh has come under attack from the Opposition for cutting of trees and rising temperatures.