Almost half a million acres 75% of Clark county Kansas burned in wildfires: 1 person dead with up to 9,000 cattle killed 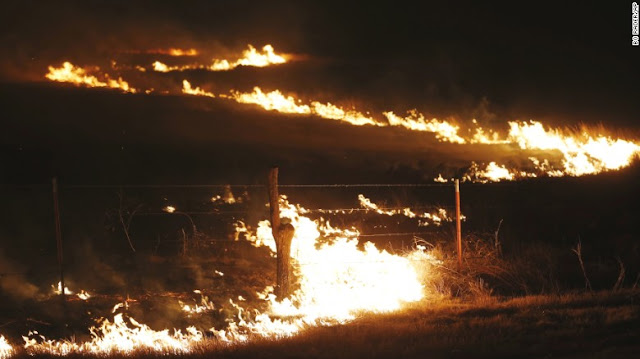 Photo CNN
The Oklahoma Forestry Service says 75 percent of Clark County has burned in wildfires.
It amounts to more than 461,000 acres burned.
The forestry service reports damage to 34 buildings, 21 homes and three bridges.
Sunday, Sen. Jerry Moran was in Clark County to tour some of the damage.
Lt. Gov. Jeff Colyer joined him.
One person died and at least least seven people were hurt in the wildfires.
Thousands of cattle were lost.
A local veterinarian estimates that anywhere from 3,000 to 9,000 cattle were killed, however many of the cattle are now calving so the actual figure is much higher.
In response to this loss, an effort is underway to help with relief efforts for orphaned calves.
You can details of this effort and how you can help on the
Home Page