Another Northern California reservoir at full capacity as a new "Weather Bomb" set to hit the area: Flooding as another 6 inches of rain expected 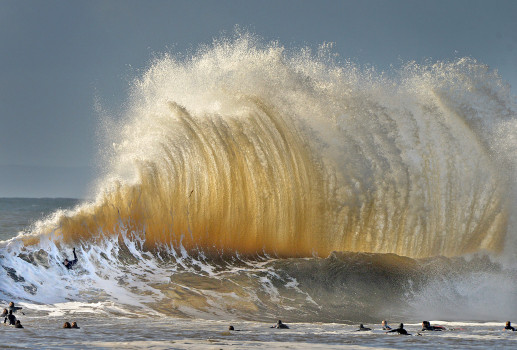 Another massive "weather bomb" heading for North California photo The Mercury News
Heavy rain and mountain snow will pound the northwestern United States early this week, with the most significant impacts targeting Northern California.
Storms will resume their track across the region following a brief break from heavy precipitation to start the weekend.
Precipitation will become more widespread and heavy throughout Monday, with the heaviest rain expected to slam Northern California. 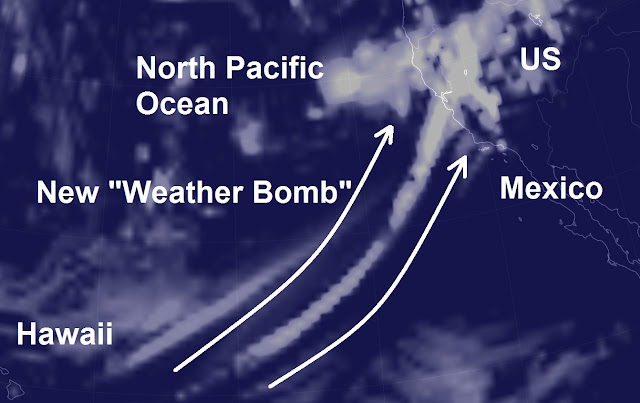 Chart Earthwindmap
A widespread 2 to 6 inches of rain can fall across the San Francisco Bay region and part of the Sacramento Valley through Tuesday, with locally higher amounts possible across the foothills.
“While the storms will bring the risk of mudslides and avalanches, the greatest threat to lives and property will be from flooding,” AccuWeather Senior Meteorologist Alex Sosnowski said.
Evacuations may be ordered in some communities if the threat for flooding is imminent. This includes near Oroville Dam, where crews have been repairing a damaged emergency spillway that sparked fears of a major flooding disaster last weekend.
Another area of concern is the Don Pedro reservoir, which officials said was at 98 percent capacity on Sunday. The reservoir captures water from the Tuolumne River.
In Stanislaus County, where the Don Pedro Reservoir is forecast to reach capacity by Tuesday, authorities are warning residents along the Tuolumne River 45 miles away in Modesto to consider evacuating voluntarily until the flood danger is past.
“We have a team of deputies going out warning people about localized flooding,” said Lt. Mike Parker of the county Sheriff’s Department, adding that up to 200 people are most at risk.


Officials say they would send water through Don Pedro’s overflow spillway if the lake level hits 830 feet, a height it’s expected to reach in the next several days.

If just one life is lost. It will be time to indict Jerry Brown. $$ for illegals, but none for the tax paying American citizen.........

Jerry Brown has completely sold us out.

Duh! Jerry Brown sold you guys out last time as well! Why stay there? I personally would pry California (at least central and southern) off and shove it into the sea! If I can I will vote for California to secede from the union-sooner the better! Good riddance. California just leads with crazy ideas we don't want or need. Good bye!

Remove all military installations, personnel, and equipment, install a naval blockade, build a wall around California, block all airline flights going to or coming from California, stop all government programs from food stamps to farm subsidies, build dams to limit water flow to California as much as possible. Make California the deportation location for all illegals and muslim refugees and disenfranchised lgbtqxyz's. Enforce a no-fly zone over the entire state and out to 500 miles off the coast.

i hope you get your wish. then let's see how long it is before you need food stamps to put the same amount of food on your table.

the US has stunningly low food prices and it's because you exploit people from other countries in shit paying jobs where abuse can go unreported.

that changes and it will upset numerous perks you now enjoy.

No chance. I live off the grid and am completely self sustaining. We raise our own animals for meat, eggs, milk, and fish (aquaponics). We grow our own veggies and fruits. We make our own cheese, butter and soap; Cure our own bacon, hams, and sausage; make our own soap, candles and natural herbal medicine and tinctures. We weave our own cloth for clothing. We even make our own hand crafted boots and shoes. We generate our own electricity through solar, wind and hydroelectric means. Self defense has been a priority for our family. The perks we have we have made through our own hard work (which the overwhelming majority of snowflakes know absolutely nothing about).

When the shtf, and it will, we are set. Screw your perks! We don't need them now and we never will.

I used to live in Central CA. Not only Jerry Brown, but the entire state legislature for decades.

If you "live off the grid and am completely self sustaining."n no one really cares what you think of the rest of society.

I have little doubt that there will be a most cataclysmic event which will alter the world as we know it. The only problem is that the HAARP installation which has just been reopened in Alaska is a major contributor to what it is we will be facing when this "event" takes place. I am of the mind to find an area that is high up in a good and rural setting with at least one other neighbor of a like mindedness whom I am able to depend on and whom can depend on me. If there is any doubt in the words I say I make reference to the first season of Jesse Ventura's Conspiracy Theory. They had it on TruTv about 7 1/2 years ago. You can go vie wit on YouTube or whatever source has it. I watched the original episodes and was blown away.

We made this move because of society, you included "anonymous."

However, I can still voice my opinion as a citizen. California wants to exit. Let those libtards go. And you can go with them!

Yep. It's coming! Fortunately, we have five neighbors, all family. We aren't taking anyone else.

People are stupid for blaming a human maybe people don't realize California is earthquake central if the ground constantly shaken how you fix concrete that keeps cracking.

Actually, you're pretty stupid for not understanding that the government in California was warned a decade and a half ago that the dams needed to be repaired but they ignored the experts. They spent all the money supporting freeloaders and illegals and now people's lives are in danger. Pull your head out of your ass and see what democrats have done to your state!