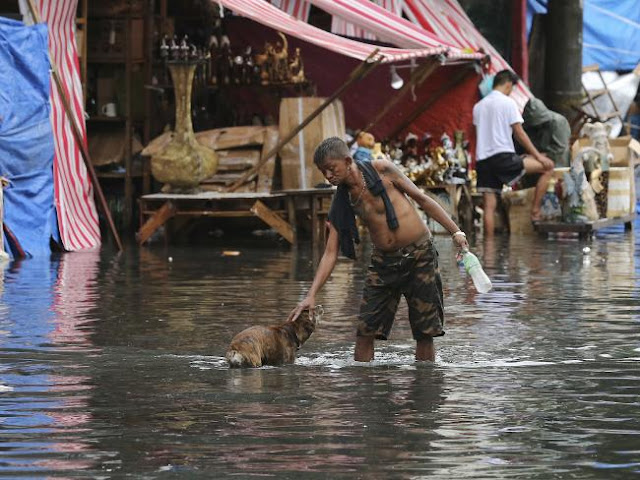 Photo News.com.Au
At least two people were killed as Typhoon Nock-Ten, which disrupted Christmas festivities in parts of the Philippines, brought heavy winds and rains to Manila on Monday, officials said.
The typhoon made land Sunday evening on the remote island of Catanduanes with wind gusts of up to 255 kph.
Although it had weakened slightly by Monday, the typhoon still had sustained winds of up to 130 kilometers (80 miles) per hour and gusts of 215 kph (133 mph), weather officials said.
Police reported a couple were killed after they were swept away in a flash flood in Albay province, southeast of Manila.
The storm, known locally as Typhoon Nina, is moving northwest at 20 kph and is expected to affect Manila later in the day, and to exit over the South China Sea late Monday, government forecasters said.
As many as 200,000 people were under evacuation orders, but officials say it has been difficult to get them to leave their homes because of the Christmas holiday, which is a major celebration in the largely Roman Catholic nation.
More than 80 domestic and international flights have been canceled, civil defense officials said.
They warned that Manila could see "heavy to intense rains, flashfloods and severe winds" when the storm struck.
"Our local disaster councils are on red alert.
We have pre-positioned relief supplies and rescue and (road) clearing equipment in Metro Manila," Mina Marasigan, spokeswoman for the country's disaster monitoring council, told the French news agency.
After making land, Nock-Ten blew westward across mountainous and island provinces, damaging homes, uprooting trees and knocking down communications.
The eastern region of Bicol felt the brunt of the storm on Sunday, with homes damaged by flooding and heavy winds, officials said.
Energy Minister Alfonso Cusi promised that power would be restored quickly in badly hit Camarines and Albay provinces.
"We've prepared for it and we are currently on the ground to assess the damage and quickly restore compromised energy facilities," Cusi told Reuters news agency.
The Philippines has a history of typhoons striking near the end of the year. In November 2013, Typhoon Haiyan plowed into the Philippines as one of the most deadly tropical cyclones on record. Also known in the Philippines as Typhoon Yolanda, the storm killed 7,800 people, according to national emergency management officials. The Philippines' weather agency says seven Christmas Day typhoons have struck the nation over the past 65 years. The country is lashed by about 20 typhoons and storms each year.

President Durante got hit by Haarp weather weapon for coozing up to China and rejecting the Americans.