A huge sunspot, bigger than the Earth is turning to face us: Sunspot AR2585 is large but (so far) quiet


A huge sunspot, bigger than the Earth is turning to face us.
Spaceweather.com are reporting solar activity is low, however, it might not remain so.
Big sunspot AR2585 has developed an unstable 'beta-gamma' magnetic field that harbors energy for moderately strong solar flares.
NOAA forecasters estimate a 20% chance of M-flares on Sept. 3rd.
Our Sun has been remarkably quiet recently as it enters its "solar minimum," period and you have to go back to July the 23rd when it released its strongest solar flare since September 2015: An M-class 7.6
But you have to go back even further since the last time it released an "X-Type flare," which are very strong and can be considerably dangerous to the Earth and surrounding satellites.
Earlier this week a wide gap in the sun's atmosphere opened up causing a monster of a coronal hole, and it is spewing a stream of solar wind into space. 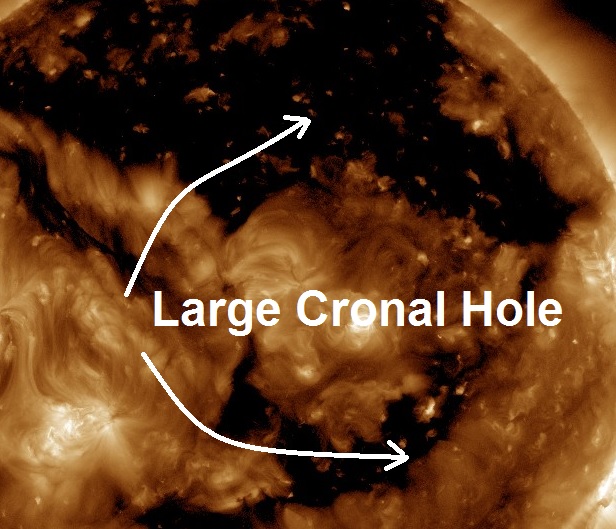 Solar wind flowing from the indicated coronal hole is reaching Earth, producing active conditions in the geomagnetic field. Credit: NASA/SDO.
NASA's Solar Dynamics Observatory is monitoring the "coronal hole" as it now begins turns away from Earth: Coronal holes are places in the sun's atmosphere where the magnetic field opens up and allows solar wind to escape.


Volcano and quake activity have been high during as coronal hole solar wind pounded the Earth leading many experts to claim the two events are connected.

Our Sun eats a comet for breakfast!
Missile test, space junk or a meteor? Blazing spectacle spotted over Nevada, Utah and California
Our Sun releases it's strongest solar flare since September 2015: M-class 7.6
It could be a catastrophe! China's first space station, Tiangong-1, appears to be out of control
Expect large quakes in the coming days: A very large Coronal hole is now facing the Earth
Meteorite smashes through house roof in Province of Phitsanulok Thailand: Rocks recovered
at September 04, 2016