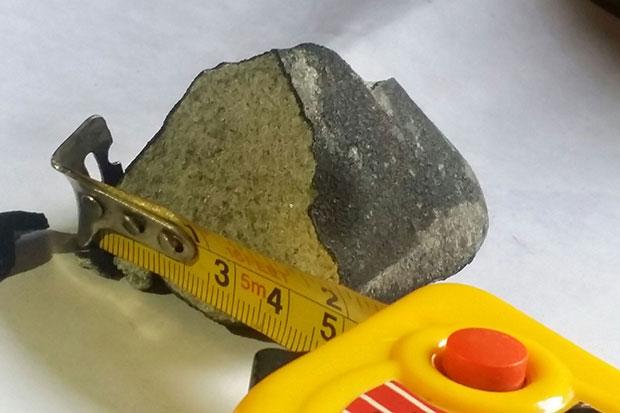 Photo www.bangkokpost.com
The suspected meteorite fell through the roof of a home in Plai Chumphon sub-district at 7.26am, hit a wall and then bounced to the floor, breaking into five pieces.
"I was having breakfast when there was a loud bang, like a gunshot sound.
I looked around and found a rock about the size of an egg and some fragments nearby.
I picked up the largest chunk and let go quickly as it was very hot," 65-year-old home-owner Bualom Chalomprai said.
Mrs Bualom believes the rock is from outer space and will bring her good luck.
Mrs Bualom's husband, Kittisak, 75, said he heard a sound of explosion in the sky at about 7am before the 300g rock fell through his roof. 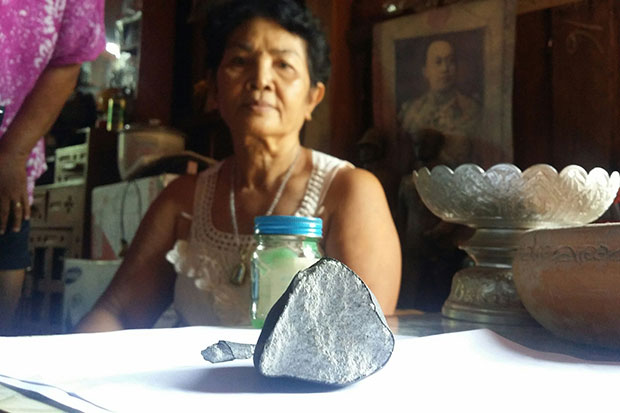 Photo bangkokpost.com
Media reports said residents in adjacent districts of Nakhon Thai and Chat Trakan also heard the "explosion".
Scientists at Naresuan University's department of physics later carried out an initial examination on a small fragment taken from the Chalomprai family home and concluded the object could very likely be a meteorite given its features and the circumstance under which it had been found.
Department head Sarawut Tuantam said the rock's crust was charcoal black, indicating it had been burned entering Earth's atmosphere at very high speeds.
The test also found the chunk contained large amount of iron and was attracted by a magnet.
Prof Sarawut added that the Chalomprais could keep the suspected space rock as it had safe radioactivity levels.