The highly pathogenic H5N8 bird flu which has been exploding in Europe and Asia has now spread to France: The poultry industry is on alert after previous outbreaks led to the culling of tens of millions of birds. 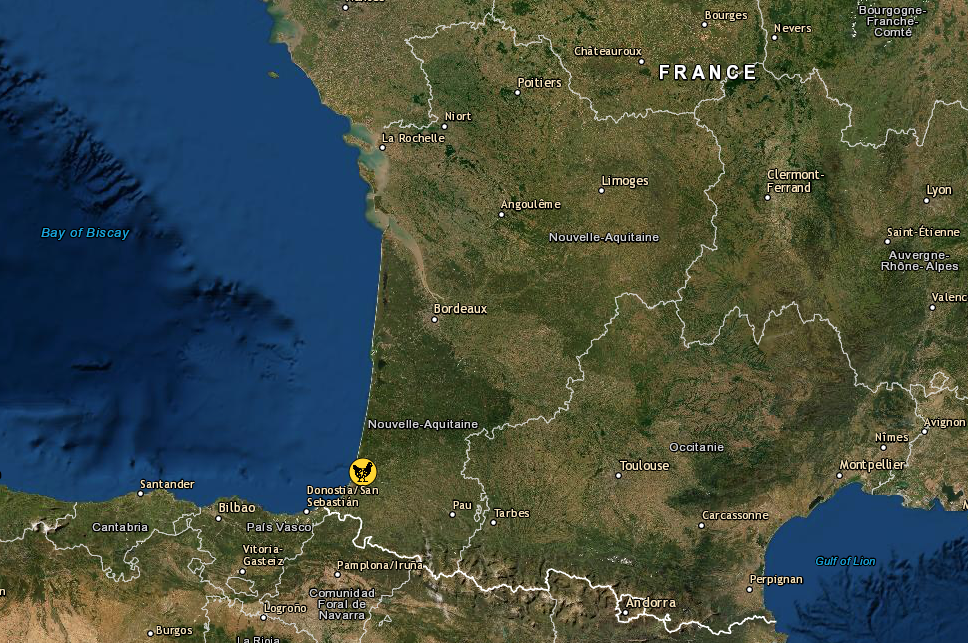 The French farm ministry said on Tuesday that highly pathogenic H5N8 bird flu had been found on a duck farm in the southwest of the country, confirming France's first farm outbreak of the virus this year. The outbreak was first reported on Monday but at the time it was unclear what strain of the virus it was. Bird flu has been spreading rapidly in Europe, putting the poultry industry on alert after previous outbreaks led to the culling of tens of millions of birds.

"The ANSES national reference laboratory confirmed today the infection of a farm of 6,000 ducks by the H5N8 virus in the municipality of Benesse-Maremne (Landes region), in which high mortality was observed on Dec. 5," the ministry said in a statement. A security zone was set up around the farm on Dec. 7, implying extra monitoring, a ban on the movement of poultry and additional sanitary measures, the ministry said, adding that all the ducks on the farm were culled. France has already detected the H5N8 virus on birds sold in three pet stores.

Investigations found that the wild birds had been sold by the same person in northern France, the agriculture ministry said last week. In addition, three wild swans and one wild goose found dead last week have also been confirmed as carrying the H5N8 virus, the ministry said. The spread of the virus in Europe prompted France to raise its bird flu security alert to "high" in early November, which requires keeping birds indoors or installing protective netting to prevent contact with wild birds that spread the disease.

The virus is spreading rapidly in Europe and Asia.

A total of 77,386 chickens were culled at a farm in the western Japan city of Gojo following the detection of highly pathogenic bird flu, the Nara Prefectural Government said in a same-day announcement on Dec. 7 The egg-laying hens, which were culled by 6:09 p.m., will be incinerated in the prefectural city of Gose and at other locations. Analysis of genes by the National Agriculture and Food Research Organization found that the virus is the highly lethal H5N8 type virus. The same strain was also detected at farms in the western Japan prefectures of Hyogo and Kagawa. (Japanese original by Satoshi Kubo, Nara Bureau)

Bird flu has been detected at a chicken farm in Hiroshima prefecture, The Japan Times reported citing local government officials on Monday. The authorities ordered culled down 134,000 chickens at the site and other affiliated farms. The H5 strain, which is yet to be confirmed as a highly pathogenic type, made Hiroshima the sixth prefecture to experience an avian flu outbreak this season.

All of the cases have been centred in western Japan, The Japan Times reported. Bird flu in Japan comes at a time when the world is battling with COVID-19 pandemic, which has become a health crisis. The farm in Mihara on Sunday reported to the local government that a number of chickens had died. A polymerase chain reaction test in the early hours Monday following a preliminary test earlier confirmed H5 virus infection, The Japan Times quoted Hiroshima government as saying.

There are about 40 chicken farms in the city, containing some 760,000 chickens in total, the government added. Several movement control points were set up around the affected farms to disinfect the vehicles moving through the areas, while Hidehiko Yuzaki, the current governor of Hiroshima Prefecture requested the deployment of Self-Defense Force troops to help with the culling. This year the first case was reported in Kagawa Prefecture in early November, followed by Fukuoka, Hyogo, Miyazaki and Nara prefectures wherein the local government carried out massive culls of chickens in and around infected farms. The total number of confirmed COVID-19 cases in Japan has reached 164,379, the Johns Hopkins University and Medicine reported on Monday. (ANI)

Yesterday, Japan's neighbours, South Korea confirmed another case of highly pathogenic bird flu at a duck farm in a southern county Saturday, putting quarantine authorities on high alert. The latest case was reported at a duck meat farm in South Jeolla Province's Yeongam County, according to the provincial government. It marks the third highly pathogenic case reported at a poultry house this year and the first such case confirmed in South Jeolla Province in three years.