The whole region is a tinderbox. Another "end-time" prophesy could be about to unravel. On Saturday, 34 people were killed in a terror attack in Ethiopia: Could a 2,600 year old Isaiah prophecy about to come true? 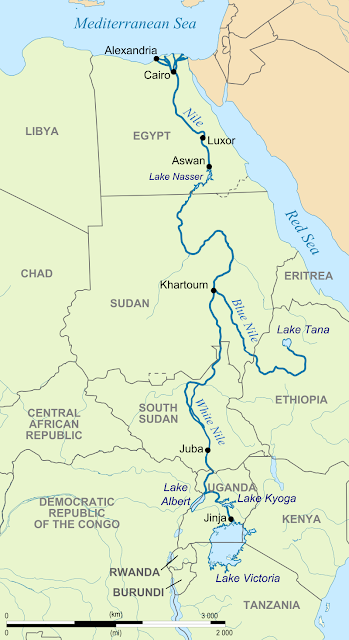 Ethiopia's massive GERD dam could stop water from flowing downstream through Sudan and Egypt. Credit Wikipedia.
If you thought 2020 couldn't get any stranger, well, think again. It's the year when many people realised many end-time Bible prophesies suddenly began fruition with covid-19 and civil unrest around the world and Israel making peace with more and more Arab nations.

Another "end-time" prophesy could be about to unravel. On Saturday, 34 people were killed in a terror attack in Ethiopia after a passenger bus in the Benishangul-Gumuz region was ambushed by armed attackers. Ethnic violence among members of various ethnic groups in Benishangul-Gumuz regional state in recent months has left hundreds dead and thousands of others displaced. The clashes are mainly over access to power and land resources.

Ethiopia appears to be fast approaching civil war. Fighting between forces loyal to the federal government headed by Prime Minister Abiy Ahmed and the Tigray People's Liberation Front (TPLF) has claimed hundreds of lives and is threatening to rip the country apart. While battles rage on the ground, the two sides are also fighting a war of words. Each is trying to rally their people and also to convince the world that they have the moral high ground. The government in Addis Ababa and the TPLF accuse one another of firing the first shots. Mr Abiy has said that army officers were murdered in cold blood.

The 12-day conflict between Ethiopia's government and forces in the country's Tigray region has escalated. The Tigrayan forces fired rockets across the border into neighbouring Eritrea, after claiming Ethiopian soldiers were using an Eritrean airport to attack Tigray. Analysts say the latest attacks mark a major uptick in a conflict which has displaced thousands of civilians according to the BBC. Ethiopia and Eritrea fought out a bloody war from 1998 and only officially ended in 2018.
Enter Mr Trump

In a remarkable speech, last month during a ceremony marking "a peace deal between Israel and Sudan," (remarkable in itself), President Trump lifted a 2,600-year old, Old Testament prophecy right from the pages of Isaiah and dropping it into the laps of the world press. Sudan borders Ethiopia and has itself been struggling to contain a civil war since 2013 and blames Ethiopia of being involved. The whole region is a tinderbox.

What is waiting for the US and UK in Bible prophecy? Ezekiel was commissioned by God to watch over them and they were blessed with power and glory but in the last days, it is very clear to see the once mighty and powerful countries are just observers of the plunder coming before the day of Jehovah!

Mr Trump went on to say regarding the massive GERD dam Ethiopia is building, the project has created a “very dangerous situation,”, Trump said because one of the country’s downstream neighbours, Egypt, which relies on the Nile and its tributaries for most of its irrigation and drinking water, “is not going to be able to live that way.” Suggesting the massive dam will cut off the Nile's life-giving water supply to Egypt.

The president’s comments came during a ceremony marking a peace deal between Israel and Sudan, Sudan ironically is also downstream from Ethiopia's dam. “They’ll end up blowing up the dam,” Trump said of Egypt. “And I said it and I say it loud and clear – they’ll blow up the dam. And they have to do something.”

Almost 86% of the water reaching Egypt originates from Ethiopia. This can rise to almost 95% in the rainy seasons. Despite Ethiopia’s massive contribution to the Nile River flow, its use of the water from the river system is almost nothing. It also still rankles that Egypt opposed external funding being sought which thwarted Ethiopia’s past attempts to develop water storage facilities and use the Blue Nile water for hydropower generation and irrigation
The last 10 years have also seen significant economic and political changes in the Blue Nile basin. These have included the birth of a new state (South Sudan), the Arab Spring in Egypt, and impressive economic growth in Ethiopia with large-scale foreign investments in agriculture. Taking advantage of this changing environment, Ethiopia officially launched its long-planned and its largest-ever engineering project, in April 2011. This dam, with a budget of $4.8 billion and an installed capacity of 6,450 megawatts, is situated about 15km from the Sudanese border. The project will create a reservoir with a volume of more than 74 billion cubic metres according to Quartz Africa.
And now a spark has been ignited.
The Tigray conflict is an ongoing conflict that began in November 2020 in the Tigray Region of Ethiopia, between the Tigray Region special forces (led by Tigray People's Liberation Front) and the Ethiopian National Defense Force, in alliance with the Amhara Region and Afar Region special forces. It has since spilt over into the neighbouring country of Eritrea, according to Wikipedia.
Religion
Home Page
at November 16, 2020

Gary, Trump is not liked enough to be the anti-christ, he was an outsider trying to change things by using his smart business mind that made sense, but it hurt politicians in their pocketbooks. He was doomed from the start.

I don't think Trump is the antichrist, Melly.

I think you should rethink the perspective here. Prophecies relating to end times fulfillment don't have the same micro-specific intent as they read for the time when it was specific. It is more type and shadow. I recommend re-reading this from the perspective that "Egypt" is symbolic of the world system. Then look at the events from a global system perspective.

Ethiopia might represent the oppressed where the Global system has been reaping its wealth and resources becoming a problem for the global agenda. Things will (are) get a little crazy. Wars will ensue. A global leader will rise.

WE are losing our freedom to live our life, sad.

trump was mentioning what any nation will do if cut off from water. He was expressing what Egypt will do not the US. These Trump haters have once again twisted the words spoken.

The Anti-Christ lives in your head. Man is God and God is man.One for all. Life is just a dream. Your dream. The Grand Illusion. Now.....wake up!