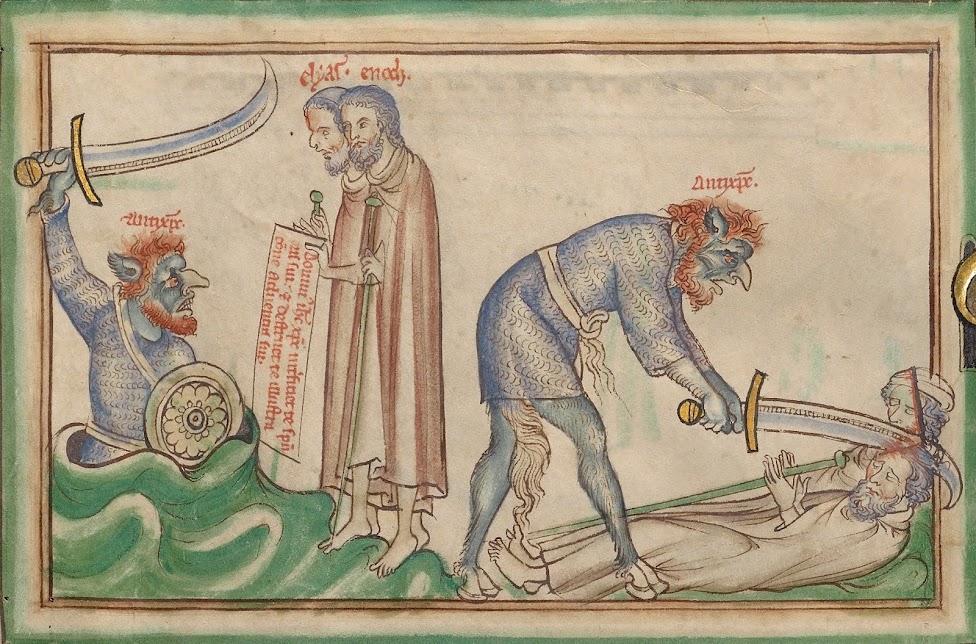 And I will give power unto my two witnesses, and they shall prophesy a thousand two hundred and threescore days, clothed in sackcloth.

These two witnesses are to be given special powers by God to witness Him for 1,260 days (3 and a half years) when they will be killed by the antichrist and left in the street for all to see for three and a half days before being called up to Jehovah. These two witnesses will breathe fire out of their mouths consuming people who are against the Lord and will have special powers to control the weather and bring plagues and pestilence.

Well, if you are like me, you would have believed the two witnesses to be two guys right? Elijah, Noah, Moses or even John the Baptist, someone like that, well we would all be very wrong! I have just watched a movie which explained the two witnesses perfectly and blew my mind at the same time. The Bible seems to have a special power to blow someone's mind, doesn't it? I will post the video below for everyone to watch at their leisure but first I want to explain what the video produced by AoC Network, tells us.

The two witnesses are not two people, no, they are two peoples. Let me explain. In Zechariah 4:2-3 is asked by an Angel what he has seen in a dream:

“What do you see?” he asked. “I see a solid gold lampstand,” I replied, “with a bowl at the top and seven lamps on it, with seven spouts to the lamps. 3 There are also two olive trees beside it, one on the right side of the bowl and the other on its left.”

The LORD called you a thriving olive tree with fruit beautiful in form. But with the roar of a mighty storm, he will set it on fire, and its branches will be broken.

The above verse is explaining the Jewish people, the tree is broken because many of them refused to accept Jesus Christ. In Romans, 11:24 we read of another olive tree.

After all, if you were cut out of an olive tree that is wild by nature, and contrary to nature were grafted into a cultivated olive tree, how much more readily will these, the natural branches, be grafted into their own olive tree!

Above, Paul is describing the Gentiles (wild by nature and contrary to nature) that would describe me before I became baptized to be perfectly honest and the natural branches grafted to their own tree would be the repenting Jews who later accept Jesus Christ as their Messiah.

In Revelation 1:12 we read once again about golden lampstands.

I turned around to see the voice that was speaking to me. And when I turned I saw seven golden lampstands

And then in Revelation 1: 20, we have an explanation, everything becomes clear.

In Acts  2:17-19, we read Jehovah will be giving out his Holy Spirit to His witnesses in spades during the last days.

‘In the last days, God says, I will pour out My Spirit on all people. Your sons and daughters will prophesy, your young men will see visions, your old men will dream dreams. 18 Even on My menservants and maidservants I will pour out My Spirit in those days, and they will prophesy. 19 I will show wonders in the heavens above and signs on the earth below, blood and fire and billows of smoke.

Revelation 11: 5-12, Jehovah explains just what special power His people will have during the tribulation period.

5 If anyone wants to harm them, fire proceeds from their mouths and devours their enemies. In this way, anyone who wants to harm them must be killed. 6 These witnesses have the power to shut the sky so that no rain will fall during the days of their prophecy, and power to turn the waters into blood and to strike the earth with every kind of plague as often as they wish. The Witnesses Killed and Raised 7 When the two witnesses have finished their testimony, the beast that comes up from the Abyss will wage war with them and will overpower and kill them. 8 Their bodies will lie in the street of the great city—figuratively called Sodom and Egypt—where their Lord was also crucified. 9 For three and a half days all peoples and tribes and tongues and nations will view their bodies and will not permit them to be laid in a tomb. 10 And those who dwell on the earth will gloat over them and will celebrate and send one another gifts because these two prophets had tormented them. 11 But after the three and a half days, the breath of life from God entered the two witnesses, and they stood on their feet, and great fear fell upon those who saw them. 12 And the witnesses heard a loud voice from heaven saying, “Come up here.” And they went up to heaven in a cloud as their enemies watched them.

Therefore this is what the LORD God Almighty says: "Because the people have spoken these words, I will make my words in your mouth a fire and these people the wood it consumes.

So, conclusion, the two witnesses mentioned in the last book of the Bible are not two people but two peoples, the Jews and the Gentiles, they will be given an incredible power to strike the earth with every kind of plague as often as they like. They will prophesy, as fire coming out of their mouths and will eventually be killed by the antichrist with their bodies left in the streets of Babylon, (world-wide cities) before Jehovah calls them up to him just before the return of Jesus Christ. Enjoy the film.

interesting, yet i see these two witnesses as jewish ... i just believe that God like He has written will bring His nation, His people , to salvation and these churches are the churches on the earth ,which have to go thru the tribulation because they have always turned against their God ....we are the church of the Body ,which is the mystery of the fellowship which Paul is our apostle , we , the church of the Body will be raptured before this tribulation .Yet the movie is interesting

Think bigger! Look at what they do. Their work identifies them. They control plagues and weather. AND they stand in witness before the god of this earth, that is Lucifer. He, Satan cannot get rid of them and they STAND before him, condemning him These two are the sun and the moon! Made at creation and reminding all mankind for always that there is a true God in heaven. The sackcloth is the lack of understanding and the lies told about their source and function. Will Satanic entities destroy them? Yes, but the God of heaven will resurrect them and put them back in the heavens.

Enoch and Elijah are the Two Witnesse. Those who receive the latter rain outpouring of the Holy Spirit and work our Dear Lord Christ Jesus Wonders here on earth to be bring in the Great Harvest are later Raptured..The Two Witnesses are killed and lay in the streets for 3 days and 3 nights where the Jews send gifts to one another but are then shocked when the Two Witnesses are called up to Heaven. GOD BLESS X

It is not good to be too dogmatic about the possible fulfillment of Bible prophecy. We know there will be two witnesses, but we won't know for sure who they are until we actually see them. I

We the believers are His church and His witnesses. IMO

My name is Alan Finch. In April of 1976, I submitted myself to the Lordship of JESUS CHRIST.

God’s main mission for the “Two Witnesses” will be that of Preparing the “Bride of Christ” which is made up Believers in Christ (the true Church) for the return of the “Bridegroom,” JESUS CHRIST. This is why that there is no “Pre-Tribulation Rapture.”

I have put together 3 documents that clearly expounds upon these 2 individuals. “The Two-End Time Witnesses”, “The Two Lampstands & The Two Olive Trees”, “The Message of the Two End-Time Witnesses.”

These documents are too lengthy to post in the comment section. If anyone is interested in reading these 3 documents, email me at: (candy33alan@aol.com), and I will be more than happy to email you the 3 copies.