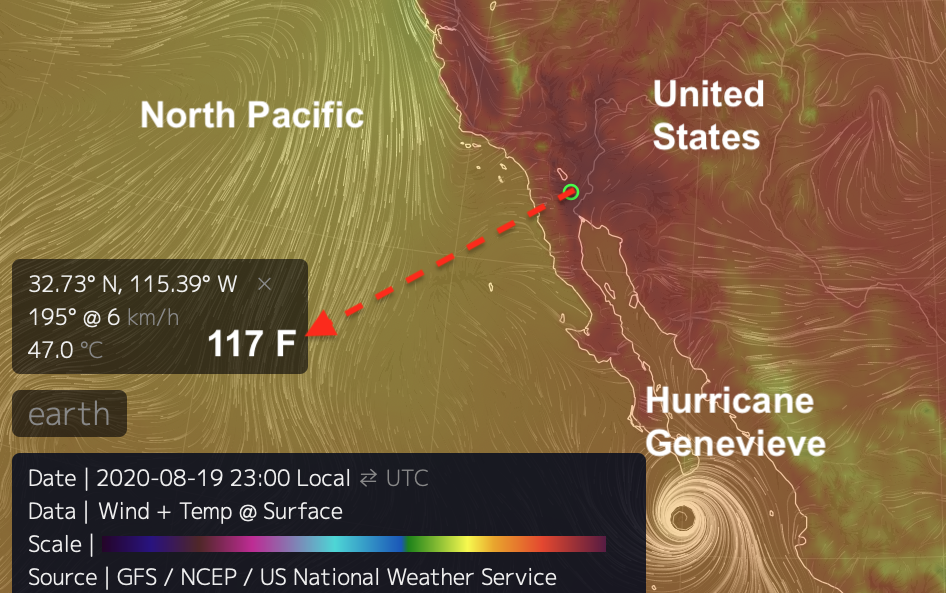 It's the time of the year many Californians dread. This year a crippeling heatwave boosted by heavy humidity is riveling the deadly seven-day heatwave event of 2006 with no let-up in the near future. It was during the deadly 2006 heatwave that Los Angeles County recorded its all-time highest temperature: 119 degrees F (48.5 deg C) in Woodland Hills on July 22 killing an estimated 450 people. Two million Californians had to manage without power over the weekend after California Independent System Operator said it had ordered utility companies to turn off power as demand for electricity to cool homes soared beyond the power available in the grid.

And, bang on schedule the wildfire nightmare has arrived. As of Wednesday night, the LNU complex of fires had burned largely unchecked across 124,000 acres (50,000 hectares), with zero containment, destroying at least 105 homes and other structures and leaving another 70 damaged, CalFire said. Several of the fires had merged by nightfall.

Nearly 11,000 lightning strikes were documented during a 72-hour stretch this week in the heaviest spate of thunderstorms to hit California in more than a decade, igniting 367 individual fires. Almost two dozen of them have grown into major conflagrations, authorities said. Multiple fires raced through hills and mountains adjacent to Northern California’s drought-parched wine country, shutting down Interstate 80 at Fairfield, about 35 miles (56 km) southwest of Sacramento, as flames leapt across the highway, trapping motorists caught in a hectic evacuation.
The firestorm was the largest of several fast-moving blazes in the San Francisco Bay Area and elsewhere in Northern California — many caused by intense lightning storms — that spread quickly overnight, burning homes and forcing thousands to flee. The newest fires stretched from wine country to the Santa Cruz Mountains, moving with ferocious speed amid an intense heatwave that also has brought rolling blackouts. Smoke from the fires has caused terrible air quality across the region. Many of the fires were believed to have been caused by lightning strikes.
Northern and Central California began experiencing an unusually active sequence of largely dry lightning strikes Sunday morning, the most widespread and violent in recent memory in the Bay Area on one of the hottest nights in years, according to Daniel Swain, a climate scientist with UCLA and the National Center for Atmospheric Research. More here
Wildfires 2020
Front Page
at August 20, 2020