Jill Biden pledging husband Joe, the soul of America, who will ‘make us whole.’ Enough already! The lies and untruths gift wrapped in lovelyism, political correctness and virtue signalling is back: The new generation of bleeding-heart liberals are here to save America! 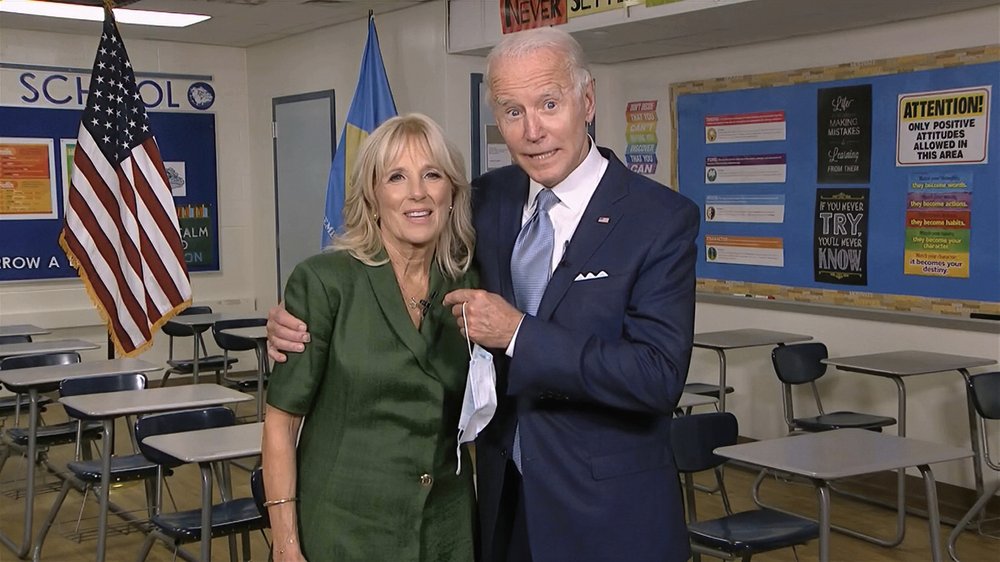 Oh boy! Here we go, I have just finished watching Jill Biden pledging husband Joe, the soul of America, who will ‘make us whole.’ Causing "laughter and possibility" to ring out from classrooms once again and he will "keep the promise of America for all of us." Now, I don't personally have anything against Joe Biden, or President Trump for that matter, however, I do baulk at the lies and untruths gift wrapped in lovelyism, political correctness and virtue signalling, especially from the new generation of bleeding-heart, liberals who want to be seen as part of a new left-wing movement which has moved from its original stance on social equality and egalitarianism to favour anything which sits in a minority because they believe minority is their new Nirvana.

The astonishing rise of lovelyism, political correctness and virtue signalling is a TERRIBLE DARKNESS which is threatening to overtake our lives. Free speech, the very heart of Western democracy is being stifled, strangled and snuffed out by political leaders lying through their teeth in order to guarantee your vote. We don't have to look any further than the American Democratic Party for a classic example, can you remember back in June the painful, cringeworthy, toe-curling attempt to show respect to George Floyd and the Black Life Matters, (BLM) movement when Nanci Pelosi and other leading lefties actually took the knee, social distancing you understand, wearing  "Kente-cloth" scarves.

Oh the irony! The scarves were originally worn by wealthy land-owners and dignitaries of the Ashanti (or Asante) tribes of what is now known as Ghana who sold slaves to the Western world. You see, lovelyism, political correctness and virtue signalling is not a plea from the heart as they would have us believe, it is nothing more than a photo-op for the, me, me, me, fraternity.

As of late last month, about 12.1% of adults lived in households that didn’t have enough to eat at some point in the previous week, up from 9.8% in early May, Census figures show. And almost 20% of Americans with kids at home couldn’t afford to give their children enough food, up from almost 17% in early June. In some states in the US struggling farmers are working with overwhelmed food banks to stay afloat. Joe Biden and his crew can package that disaster anyway he wants, however, lovelyism, political correctness and virtue signalling you cannot eat!

Most people have been 'programmed' and divided for so long that they can't see the nail in their eyes any more. The Green New Deal' = The World Economic Forum's "Great Reset/The 4th Industrial Revolution" = the UN's NWO (www.UNNWO.org). It all works according to plan. The US population has been duped. Their eyes are glazed over by a haze created by their secret governments (incl CIA fractions) to believe what is true isn't and what isn't is. Even the most obvious conspiracy 'theories' aren't recognized as actual conspiracies.

However, there are perhaps enough waking up to the long standing pandemic of deception and deceit. Will the shadow 'government's plan work to prevent an uprising? For decades people's rights have been chipped away, the media bought by corps and special interests and people thrown intentionally into economic distress and chronic disease (e.g., by force vaccinations, fluoride/chloride in drinking water etc) to keep them tethered in a permanent struggle for survival and occupied with things other than clear reflection on what the politicians are putting on as a play for them.

Still, a large enough mass may rise early enough before the last 'resistance' is being dimmed and thinned by a gene modifying covid-vaccine that is known to be of no medical benefit to combat 'this virus.'

The real virus has been growing in the US and other populations for long, it has to be extracted and eliminated. And in the end, it will.

The people of the USA and UK have been Socially Engineered with lies, disinformation and have truths for decades. Check out the "Tavinstock Institute Socially Engineering The Masses". The CIA, MI5, MI6 and Musad are all involved in a giant conspiracy of misinformation and mind F---. I turned off my cable TV March 4, 2016 because I was tired of paying for 20 min. of pharmaceutical commercials per hour and the lies being spewed by our lame stream media. It truly is difficult to be a mature, awake, loving, Christian man or woman among a sea of treasonous elected representatives and the Sheeple they lead. Unfortunately this is the situation in every country around the world. 1% Rich, 1% Bikers, 1% Gangsters and Thugs, 4% Sociopaths and Psychopaths, 90% Sheeple and 3% Awake making up the difference. Live,Love and Laugh if that does not work Load, Aim and Fire. Take Care.

Jill Biden should be ashamed of herself. She knows how ill her husband is and yet puts him before the public and subject him to ridicule. A disgraceful wife!

Hello Gary,
Hope this email finds you well. Are you surviving the heat?
Here in So.Cal. It is brutal with 106*F and humid. Even the dog won't go outside.

I wanted to share this info with you regarding “The Great Reset”. As usual, I do not want credit as I am merely passing on the info.

This article talks about “The Great Reset” which has been proposed by the elite, Prince Charles, and other world leaders to take place next year, probably by February or March 2021. The elite will be meeting with the UN, the World Economic Forum, International Monetary Fund, and other influential people in Davos, Switzerland in January 2021 to make decisions for the people of the world. Please familiarize yourself with this agenda from the NWO, as this will become a “new normal” soon. They will use the “short opportunity” of the virus, the failing economy, black lives matter, and the Green New Deal, Climate Change, to help implement some of these ideas such as a cashless society, and a social crediting system such as what the Chinese use. As you know, censorship on the internet is becoming more into play and many of our rights are being stripped from us, without care by most people.
Also, get prepared for very challenging times in Sept, Oct, and November. Please stock up on foods and other necessary items, if you need to hunker down. Between now and the election, things are only going to get worse. Who knows how long all this craziness will last.

****************
Ground Zero with Clyde Lewis also did a show on this topic. You could read and watch these videos from this as well. There is a good video called “The Great Reset” within his article providing a good summary.........