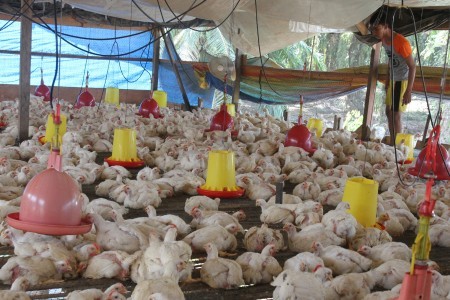 Vietnam culls 137,000 birds to contain avian influenza outbreaks Vietnam has so far this year culled 137,180 birds to contain the spreading of bird flu outbreaks, the government said on Thursday. The outbreaks, including 38 outbreaks of H5N6 and five outbreaks of H5N1, have been detected in 13 out of Vietnam's 63 provinces this year, the government said in a statement. All of the bird flu outbreaks have happened at farms where the birds have not been vaccinated, it said, adding that, in several provinces, only 10%-20% of the birds were vaccinated. Vietnam has a poultry flock of 460 million, and small-sized bird flu outbreaks have not been uncommon in the country during the past five years.TJP

Vietnam culled more than 1.2 million farmed pigs infected with African swine fever in May. Pork accounts for three-quarters of total meat consumption in Vietnam, a country of 95 million people where most of its 30 million farm-raised pigs are consumed domestically. The virus was first detected in Vietnam in February and has spread to 29 provinces, including Dong Nai, which supplies around 40% of the pork consumed in Ho Chi Minh City, Vietnam's southern economic hub. "The risk of the virus spreading further is very high and the evolution of the outbreak is complicated," the government said in a statement. It said many provinces had failed to detect outbreaks and cull infected pigs properly due to a lack of funds and the space needed for burying the dead pigs. The United Nations Food and Agriculture Organization (FAO) in March advised Vietnam to declare the swine fever outbreak as a national emergency. Full story