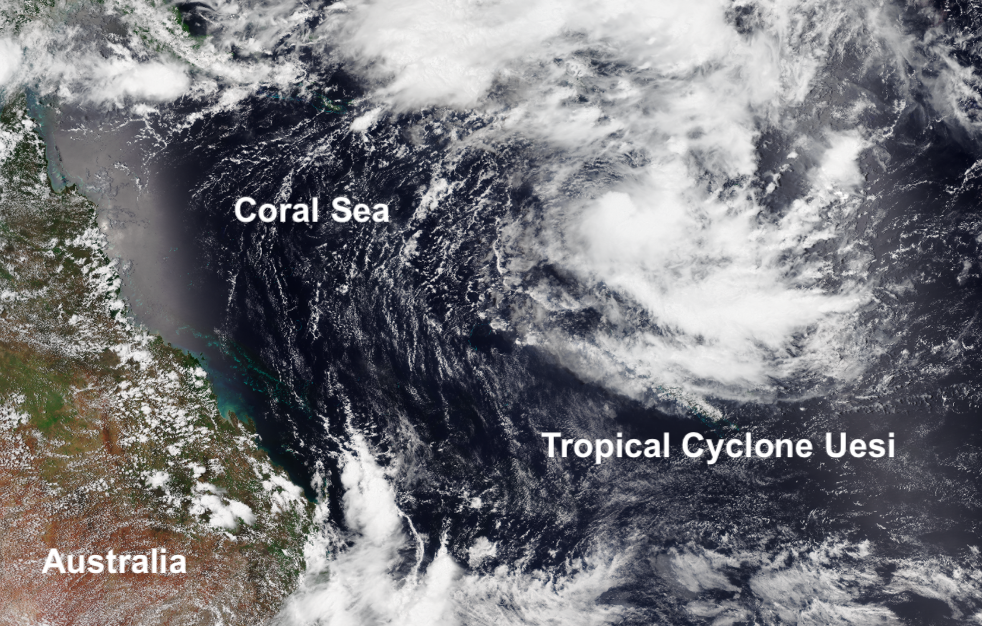 The still image above was captured by the NOAA-20 satellite's VIIRS instrument, which scans the entire Earth twice per day at a 750-meter resolution.

Winds close to the centre of Tropical Cyclone Uesi are estimated at 125KM/HR. according to the Vanuatu Met office. In the past 12 hours, the system has moved in a south southeasterly direction at a speed of 12KM/HR. The potential for the system to recurve and move towards Vanuatu is low. Seas will remain very rough with heavy to phenomenal swells over coastal and open waters to the west of the Vanuatu group. Severe weather warning for heavy rainfalls for northern, central and southern provinces, while Marine strong wind warning for all coastal waters are current.


A relatively stationary tropical low south of the Solomon Islands has developed into a tropical cyclone after drifting slightly southward and intensifying on Sunday, Feb. 10, 2020. The storm was named Tropical Cyclone Uesi by the Fiji Meteorological Service.

Joint Hurricane Centre
According to the last update from the Joint Typhoon Warning Center, Uesi is approximately 382 miles west of Port Vila, Vanuatu, and is tracking southwestward at roughly 7 mph with maximum sustained winds around 70 mph and gusts of about 85 mph. This is equivalent to a strong tropical storm in the Atlantic and Eastern Pacific basins.
Occasional downpours are expected to continue across the northern Vanuatu islands through the beginning of the week, and the storm is expected to strengthen due to a favourable environment of low wind shear and warm water. Meteorologists forecast that it will bring heavy rain and strong winds as it moves toward northwestern New Caledonia. Forecast models also suggest it may potentially head toward eastern Australia toward the end of the week as it weakens.


The image loop was captured by the Advanced Himawari Imager (AHI) on Japan’s Himawari-8 satellite. This satellite, the first unit of the Japan Meteorological Agency's (JMA) third-generation of geostationary satellites, provides visible light and infrared images of the Asia-Pacific region. Himawari's data are vital for global geostationary coverage, which is why NOAA and JMA have agreed to mutual back-up arrangements for their geostationary systems.