Spain is searching for 67 migrants missing from a boat trying to reach European a day after 119 recovered from cold Mediterranean waters: Boat carrying 125 Rohingya refugees sinks in Bay of Bengal killing 16 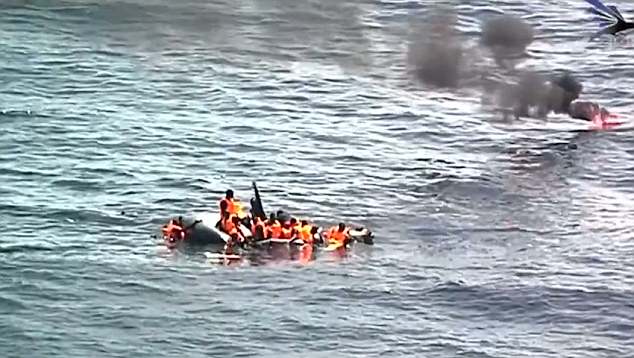 Many of the boats coming from Morrocco are overcrowded with migrants and the boats are not seaworthy, photo Daily Mail

Spain on Tuesday resumed the search for 67 migrants missing from a boat trying to reach European shores a day after maritime authorities rescued 119 others from cold Mediterranean waters. A spokeswoman with Spain's Maritime Rescue agency said the search for the missing rubber boat in the stretch of sea separating Spain from Morocco restarted with a rescue vessel and a plane. A rescue charity alerted authorities Monday about the boat's departure from Moroccan shores, saying that 49 men, 13 women and 5 children were on board, the official said. She was not authorized to be named in media reports. Also Monday, rescuers found two rubber boats in the Alboran Sea with 60 and 59 migrants from Africa. The migrants, including 26 women and five children, disembarked in Spain's southeastern city of Malaga and were all in good health, the spokeswoman said.

Refugees fleeing violence and migrants fleeing poverty look for a new life in Europe by setting off on dangerous trips by sea from African coasts. Spain became the main entry point into Europe for migrants in 2018 but saw the number of arrivals halved last year to 26,168. Recently it has seen an uptick in the number of boats heading to the Canary Islands, which lie in the Atlantic Ocean off Africa's northeastern coast.

An overcrowded boat carrying about 125 Rohingya refugees from Bangladeshi camps sank early Tuesday in the Bay of Bengal, leaving at least 16 dead, Bangladeshi officials said Tuesday. The coast guard, navy divers and other rescuers recovered the bodies of 14 women, one child and a man after the wooden boat capsized off St. Martin's Island, the top elected official on the island told The Associated Press. Noor Ahmed told AP by phone from the scene that some 62 refugees on the boat survived. They were wooed by traffickers to get on the boat from various points as it was heading for Malaysia, he said. Iqbal Hossain, an additional police superintendent in Cox's Bazar, said by phone the overcrowding of the boat had caused it to capsize and that it may have been carrying additional cargo as well. Hossain said the bodies were sent to nearby Shah Porir island and the rescue operation was continuing. But he would not give an exact figure about how many still remained missing.

Traffickers usually lure refugees by promising a better life overseas. Many past attempts to travel illegally by boats were thwarted by coast guards. More than 700,000 Rohingya Muslims fled to Bangladesh from neighbouring Myanmar to flee a harsh crackdown by Myanmar's military since August 2017. Myanmar has long claimed the Rohingya are "Bengali" migrants from Bangladesh, even though their families have lived in the country for generations. Nearly all have been denied citizenship since 1982, effectively rendering them stateless.