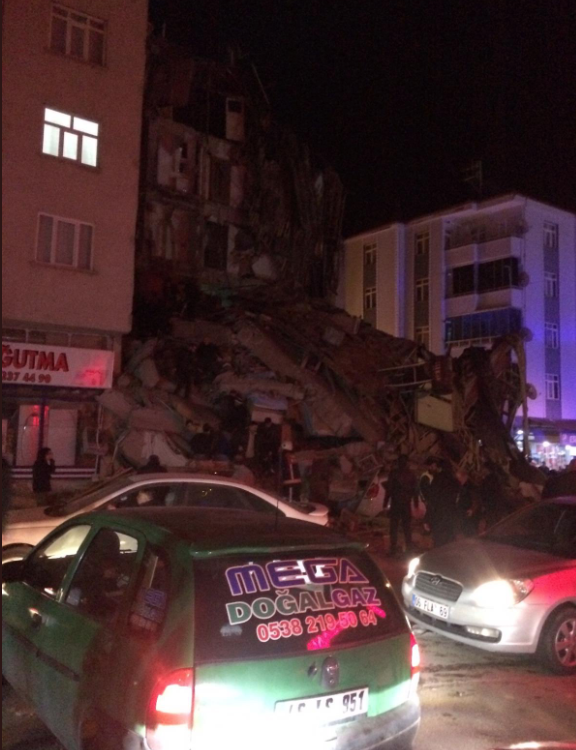 Photo credit Seyyah ❂
‏19 people were killed, and 553 others were injured after a massive earthquake with a magnitude of 6.8 rocked the eastern Turkish province of Elazığ on Friday evening. "Death toll in Elazığ earthquake has risen to 18; 405 people were injured in Elazığ and 148 others in Malatya. We are doing our best to rescue 30 people trapped under a collapsed building," Interior Minister Süleyman Soylu said after the quake. The temblor reportedly lasted 15 seconds. "170 additional ambulances have been dispatched to Elazığ and Malatya provinces. Air ambulances are also ready to help the affected," Health Minister Fahrettin Koca stated. According to Turkey's Disaster and Emergency Management Authority (AFAD), the quake struck Elazığ's Sivrice district at 8:55 p.m. (1755 GMT) from a depth of 6.7 kilometres. Soon after the initial quake, the province was shaken further by a series aftershocks ranging from between a magnitude 5.4 to 3.3. Daily Sabah

The 6.8 magnitude quake, centred on the town of Sivrice in Elazig province, caused buildings to collapse and sent residents rushing into the street. Tremors were also felt in neighbouring Syria, Lebanon and Iran. Earthquakes are common in Turkey - about 17,000 people died in a massive quake in the western city of Izmit in 1999. Friday's quake struck at about 20:55 local time (17:55 GMT). According to Turkey's Disaster and Emergency Management Authority (AFAD), there were 60 aftershocks recorded after the earthquake. BBC

The temblor was the second earthquake to rattle Turkey in two days. A 5.4-magnitude earthquake struck in Western Turkey on Wednesday, followed by a 4.1 aftershock. A few dilapidated structures collapsed but there were no further reports of damage or injuries, according to the AP.
Turkey is located in a seismically active zone and often suffers from powerful earthquakes. The two deadliest quakes in the country occurred in 115 AD and 526 AD. Both disasters devastated the city of Antioch, leaving some 260,000 and 250,000 people dead, respectively.