TEPCO says new leak has spilt 20,000 litres of radioactive coolant at the stricken Fukushima Nuclear Plant: It is now almost 7 years since Prime Minister Shinzo Abe declared everything is "under control," 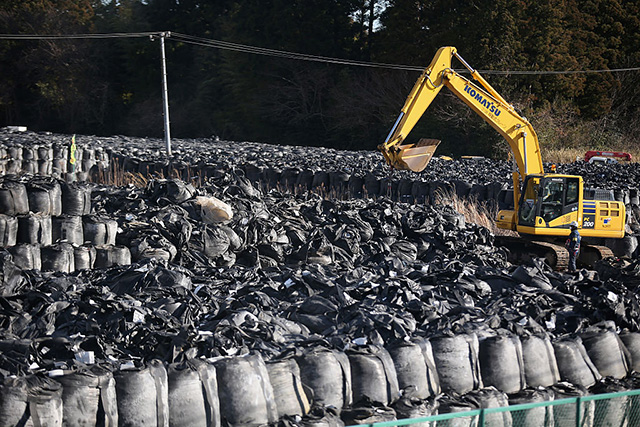 Tokyo Electric Power Company says coolant has seeped out from an underground frozen soil wall built around its crippled Fukushima Daiichi nuclear plant. The frozen soil wall came into operation four years ago. It was built to keep groundwater from flowing into reactor buildings. They were damaged by the March 2011 earthquake, tsunami and subsequent nuclear meltdowns.

The utility firm, TEPCO, says it found coolant leaking at three locations from components that connect pipes in the wall. The company had noticed a reduction in coolant in its tank earlier this month and was searching for the cause. TEPCO says it believes 20,000 of 1.1 million litres of the coolant has leaked, but that this will not affect the operation of the wall. The company says it will replace the components in the wall and repair another leak that was found in December. nhk.org

Almost six years after Prime Minister Shinzo Abe famously declared the contaminated water problem at the Fukushima No. 1 nuclear plant "under control," today it remains anything but.
Tokyo Electric Power Co. (TEPCO) continues to face difficulties in dealing with water contaminated with radioactive substances at its crippled plant. About 18,000 tons of highly contaminated water remains accumulated in reactor buildings and other places. Abe made the  "under control," declaration in September 2013 while Tokyo was bidding to win the 2020 Summer Games.
In reality, however, the situation is not under control even now.

In a meeting of the Nuclear Regulation Authority (NRA) in June, one of its members, Nobuhiko Ban, told TEPCO officials, "I want you to show whether you have a prospect (for the reduction of contaminated water) or you have given up." The water level did not fall as planned in an area of a basement floor at the No. 3 reactor building for two months. Asked why the level did not drop, TEPCO officials offered only vague explanations in the meeting. Ban made the remark out of irritation. Highly contaminated water that has accumulated in reactor buildings and turbine buildings is a major concern at the Fukushima plant. In addition to water that was used to cool melted nuclear fuel at the No. 1, No. 2 and No. 3 reactors, groundwater also has flowed into those buildings through cracks. The concentration of radioactive substances in highly contaminated water is about 100 million times that of the contaminated water that has been processed and stored in tanks.

Immediately after the nuclear accident at the Fukushima plant in March 2011, highly contaminated water leaked into the sea through underground tunnels. As a result, radioactive substances whose concentrations were higher than allowable standards were detected in fish and other seafood. After the nuclear accident, about 100,000 tons of water initially accumulated in the basement portions of buildings that housed the No. 1, No. 2, No. 3 and No. 4 reactors and buildings that accommodated turbines. TEPCO has removed groundwater through wells.
It also created "frozen walls" in the ground by freezing soil around the buildings.
Using those methods, the company has decreased the flow of groundwater into the buildings and, as a result, the level of highly contaminated water has dropped there. Nine years since the nuclear accident occurred, the volume of highly contaminated water in the buildings has fallen to 18,000 tons. TEPCO aims to reduce the volume further to 6,000 tons by the end of fiscal 2020. Fairwinds.org

It’s a extermination event! If this doesn’t turn you to Christ Jesus.
EC

Humanity and Nature are both facing several extinction events that are all compounding upon us simultaneously. Fukushima Raddiation, 5G Military Biological Weapons System, Artificial Intelligence, Geoengineering = Climate Change = Climate Control = Weather Warfare and Biosphere Poisoning, Thawing Frozen Methane Hydrates, Ionized Atmosphere, Endless War, and a Collapsing Biosphere are all upon us. The worst part for me is finding out that our Satanic Globalist Pedophile powers that be have planned all of this out for decades or longer. Tell me something good. Tell me another lie.
Christopher

It is killing our ocean....

Tepco & Abe have lied to the world! Long term dire consequences await the world because of this!

I am known as Christopher , not some unknown, I seek the Truth and speak the Truth. Our Oceans are in Parel, along with us.

If 90% are Sheeple, 1% are Bikers, 1% are Gangsers, 1% Thugs and 4% Satanic, Globalist ,Pedophiles, that leaves
3% of us making the difference! There Is Hope. Have Faith and constructive interactions! We All Have One Mother Earth!. Love Her!!!
Christopher