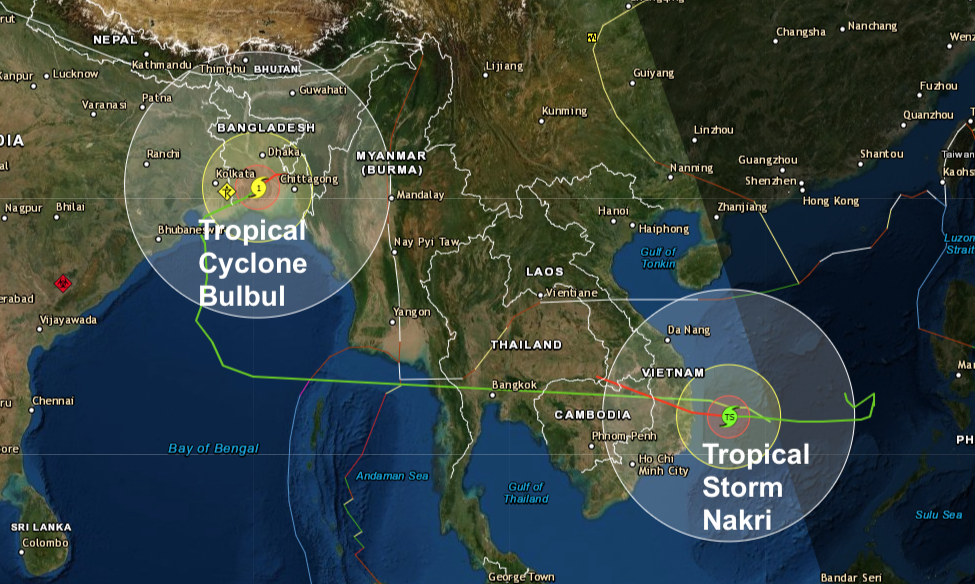 Cyclone Bulbul smashed into the Bay Of Bengal yesterday afternoon after more than 2 million people had earlier been evacuated.

According to Reuters, several coastal districts were expected to register wind speeds of up to 120 kilometres per hour (74.5 miles per hour) and heavy or very heavy rainfall, the Bangladesh Meteorological Department said in its latest forecast. It said low-lying areas and islands were likely to see storm surges between five and seven feet (1.5-2.1 meters) higher than normal maximum tide levels.

Cyclone Bulbul lashed Bangladesh overnight, killing six people and leaving relatives in a desperate search for 36 missing fishermen, though prompt evacuations saved many lives and the worst was over, officials said on Sunday. Some 30 people were injured and around 6,000 homes were partially or fully damaged, authorities said. Five of the six victims were killed by falling trees, including a 52-year old woman who had spent the night in a shelter. She returned home on Sunday and was killed when a tree crashed on her house. Another victim, a 60-year old fisherman, had refused to evacuate. Two fishing boats have not yet returned and relatives have been unable to contact the men on board, said Anwar Uddin, a local public representative in the southern Bhola district.

No major damage was immediately reported in camps in southeast Bangladesh where hundreds of thousands of refugees from neighbouring Myanmar are living. Some 2 million people from all of Bangladesh's 13 coastal districts huddled in about 5,558 shelters on Saturday night. Outside, wind speeds rose to between 100 and 120 km per hour (62 to 75 mph) and some low-lying coastal areas were flooded. Wind speeds have now come down to between 70 and 80 kph (43 to 50 mph), authorities said."It may take a couple of days to get a normal situation," Enamur Rahman, a junior minister for disaster management and relief, told Reuters.

About 1,200 predominantly domestic tourists were stuck at the Saint Martin island in the Cox's Bazar district, Rahman said."All of them will be rescued," he said. The cyclone season in the Bay of Bengal can last from April to December. In 1999, a super-cyclone battered the coast of India's Odisha state for 30 hours, killing 10,000 people. India's eastern states of West Bengal and Odisha have received heavy rainfall since early Saturday and there were reports of hundreds of trees being uprooted.

Meanwhile, tuoitrenews.vn reports, of torrential rain forecast to dampen various provinces in Vietnam’s central region and Central Highlands over the next days after Tropical Storm Nakri makes landfall on Sunday night. The storm, the sixth to impact the Southeast Asian country this year, was located 260 kilometres east of the south-central coastline as of 7:00 am on Sunday, according to the National Center for Hydro-meteorological Forecasting. Average wind speed was at 90 to 100km per hour and gusts at up to 150km an hour. In the next 24 hours, Nakri is expected to travel westward and make landfall in the south-central provinces of Binh Dinh, Phu Yen, and Khanh Hoa, unleashing winds at 60 to 90kmp per hour.