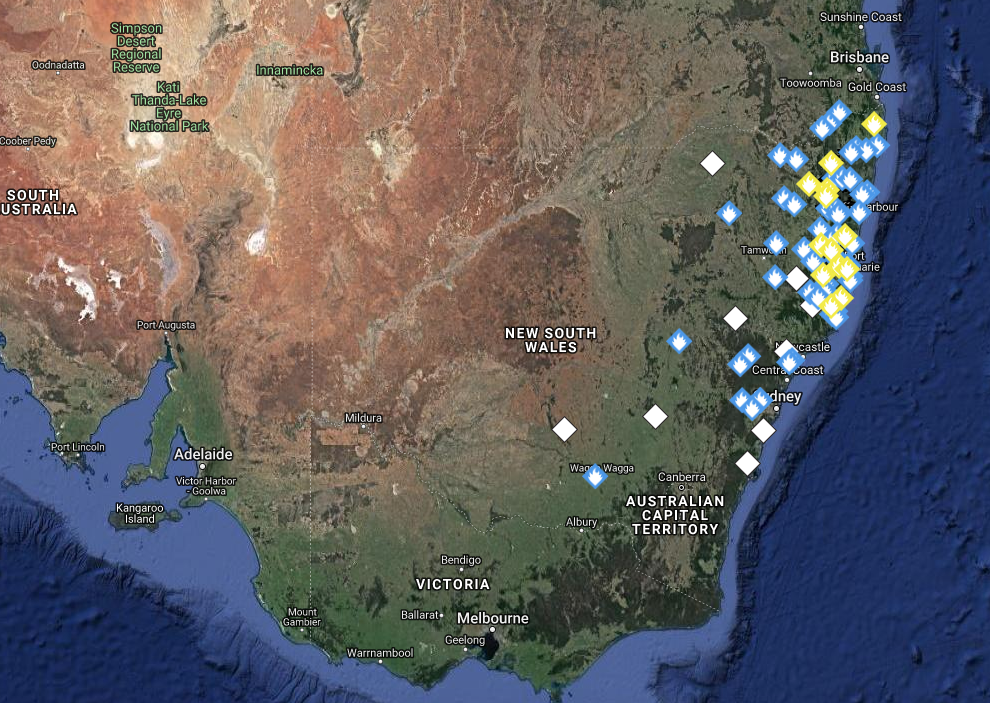 A warning from the New South Wales Rural Fire Service (RFS) claiming Tuesday's bushfire risk for the Greater Sydney and Greater Hunter areas are set to be "catastrophic". It is the first time the Sydney region has been rated at that level since fire ratings began. The RFS has issued a strong warning that "lives and homes will be at risk" as high temperatures of near 40 deg C, (104 deg F) strong winds and low humidity will combine to create fierce conditions.

The fires are thought to be Australia's worst bushfire season already with summer hardly started and are expected to escalate with many parts of the country suffering a devastating drought. NSW RFS Commissioner Shane Fitzsimmons said little reprieve in fire conditions could be expected over the next week or throughout the summer months of December, January and February. “The forecast for the balance of the season continues to be driven by above-normal temperatures (and) below-average rainfall to dominate over the coming months,” Fitzsimmons said. On Friday, state fire authorities issued a record number of emergency warnings, with 17 fires declared to be at an emergency level with high winds and dry-conditions fanning the flames. Last summer was Australia's hottest ever, with 2017 and 2018 the 3rd and 4th hottest years ever.

The full report issued today is below.

Catastrophic is the highest level of bush fire danger. Homes are not designed to withstand a fire under these conditions. If a fire starts and takes hold during Catastrophic fire danger conditions, lives and homes will be at risk. Advice for people in areas of Catastrophic fire danger include: Avoid bush fire prone areas. A safer area may be a large town or city, shopping centres or facilities well away from bushland areas. Schools in identified high risk areas will be closed. Schools will notify affected students. Start making arrangements now. If you are unable to leave, identify a safe location which may be nearby. This may include a Neighbourhood Safer Place.

Large areas of the state are also forecast to experience Severe and Extreme fire danger. This includes in the north coast and northern NSW areas, where there is a large number of fires already burning. These fires will not be contained in time and will threaten lives and properties.

Based on latest forecasts from the Bureau of Meteorology, the following fire danger ratings are expected on Tuesday. These are subject to change as forecasts are updated: Catastrophic – Greater Sydney and Greater Hunter (including the Blue Mountains and Central Coast areas) Extreme – North Coast, Illawarra/Shoalhaven, Central Ranges, Northern Slopes and North Western Severe – Far North Coast, New England, Far South Coast, Southern Ranges, Lower Central West Plains This is the first time since new Fire Danger Ratings were introduced in 2009 that Catastrophic fire danger has been forecast for Sydney. A statewide total fire ban has been declared for all areas of NSW for all of Monday and Tuesday.

According to ABC News Australia, emergency alerts were issued on Sunday afternoon as winds picked up for the blazes affecting Johns River, south of Port Macquarie, and Mt Nardi National Park near Lismore, but were later downgraded. More than 60 fires continued to burn on Sunday night. But the wider focus is now on preparations for the week ahead. The RFS issued a dire warning for Tuesday, saying: "If you are threatened by fire, you may not get help." RFS Commissioner Shane Fitzsimmons said: "Indications are that the weather conditions will be worse than what we experienced [on Friday]." "Not only will they be worse, but they will also be concentrated much further than just the north-eastern area of NSW." Mr Fitzsimmons said along with the 1,300 firefighters on the ground right now from across Australia and New Zealand, they were in contact with colleagues from Canada and the US for possible help in light of Tuesday's predicted forecast. They were also in discussions with the Australian Defence Force.