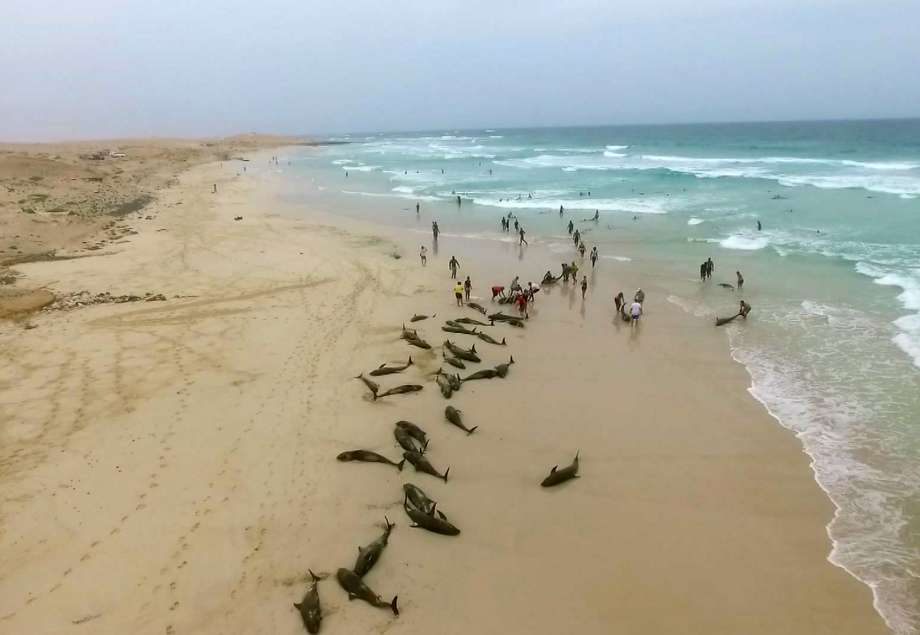 Authorities in the Cape Verde islands off West Africa are waiting for experts from Spain to help determine why more than 100 dolphins died on a local beach. Local media report that around 200 melon-headed dolphins were found on a beach on Boa Vista island on Tuesday. Officials, residents, and tourists managed to drag some of them back out to sea, but many returned. Bulldozers buried 136 dead dolphins. BIOS Cape Verde, a volunteer environmental association in the former Portuguese colony, said on its Facebook page Friday it took samples from 50 dolphins and four others were placed in deep freeze by the local council. The group said veterinarians from the University of Las Palmas in Spain's Canary Islands are due in the coming days to perform tests.

The beached dolphins come once again during coronal hole activity on our Sun. Regular Big Wobble readers will be aware solar storms may trigger whale strandings as well as dolphins, birds and bees and other animals who rely on our magnetic field to navigate. According to Spaceweather.com,  G1-class geomagnetic storms are in progress as a fast-moving stream of solar wind buffets Earth's magnetic field. The gaseous material is flowing from a large hole in the sun's atmosphere. The storm could intensify to category G2 if, as expected, the pace of the solar wind quickens on Sept. 28th.

A new study by the International Journal of Astrobiology appears to agree with The Big Wobble, releasing a report claiming; "Solar storms may trigger sperm whale strandings: explanation approaches for multiple strandings in the North Sea in 2016." The report by the International Journal of Astrobiology claims large solar storms, may have played a role in the strandings of 29 sperm whales in the North Sea early in 2016. The study says these geomagnetic disruptions may have confused the whales' ability to navigate, diverting them into the shallow waters.

The coronal activity on the Sun and the geomagnetic storms have coincided with a flurry of major quakes and volcanic activity to impact our planet in the last few days, see below:

Last night, a magnitude 6.0 - 96km S of Raoul Island, New Zealand was the 5th major quake in the last 4 days, during a week of violent quake and volcanic activity, however, a number of smaller quakes have been hitting the headlines.
A powerful 5.8 magnitude earthquake struck northeast Pakistan on Tuesday, badly damaging scores of homes and shops and killing at least 22 people and injuring over 700, officials said. The quake badly damaged a key road leading to the town of Mirpur in the Pakistan-administered part of Kashmir and adjoining villages, where most of the damage was located. Mushtaq Minhas, information minister in Pakistan-held Kashmir, said 22 people, including women and children, were killed in the quake, mostly due to collapsing roofs and walls. "We are supplying tents, food and other essential items to earthquake-affected people.
Meanwhile, a shallow tremor sent terrified people running into the streets in Azad Jammu and Kashmir on Thursday, days after another powerful quake killed 38 people, flattened thousands of homes and destroyed infrastructure and roads in the same area. The quake rattled already frayed nerves in the city of Mirpur as fears of the fallout from another powerful tremor sent hundreds into the streets and put local hospitals on alert. The US Geological Survey put the quake at 4.7 magnitudes and 10 km deep, adding that it struck just four kilometres outside of Mirpur. Reports said some 70 people were injured in the tremor.
At least 20 people were killed and dozens injured Thursday in a strong earthquake that rocked Indonesia's remote Maluku islands, triggering landslides that buried at least one of the victims, the disaster agency said. Terrified residents ran into the streets as buildings fell in around them when the 6.5-magnitude quake hit in the morning. "At least 100 people were injured and more than 2,000 evacuated," said national disaster mitigation spokesman Agus Wibowo who gave the latest death toll in a statement. Among those killed was an infant, he said. Earlier, local disaster agency officials said some victims had been killed by falling debris while one person was buried in a landslide. Another victim died of a heart attack as the tremor hit, while one woman died after falling off her motorbike while fleeing to higher ground, officials said. Residents of Ambon, a city of about 400,000 people, were seen helping injured residents in blood-stained clothes, while images showed wrecked homes with collapsed walls and rubble-strewn on the ground.
A powerful, 5.7 magnitude earthquake shook buildings and damaged two mosques in Istanbul on Thursday, slightly injuring eight people and causing residents to rush from buildings. Witnesses in the city of 15 million, Turkey’s largest, felt buildings sway and said some offices and schools were temporarily evacuated. Three major seismic fault lines criss-cross Istanbul, which straddles Europe and Asia. The tremor was at a depth of 12.6 km, the Kandilli Observatory and Earthquake Research Institute said, locating its epicentre 70 km (44 miles) west of Istanbul in the Marmara Sea, south of the town of Silivri. It struck at 1:59 p.m. (1059 GMT). Both the observatory and the U.S. Geological Survey assessed its magnitude at 5.7.
On Tuesday evening the Popocatepetl volcano near Mexico City and the Poas volcano Costa Rica erupted. There were no immediate reports of casualties or damage.
Yesterday's powerful quake was the 8th major quake of a quiet September and brings the 2019 total to 108.